“Today you are you. That is truer than true. There is no one alive more youer than you.”

That comes from Happy Birthday To You, one of the myriad of books in the catalog of Dr. Seuss masterpieces that decorate many a bookshelf and have influenced any number of childhood, and foster a creativity across all ages.

You look quite terrific for one hundred thirteen,
the lessons from you, we still every day glean.

These days, it’s hard to think of a time before Seussian rhyming and characters like the Grinch and the Cat in the Hat weren’t part of our everyday culture. Words like Nook, and Grinch have become a part of our lexicon.

There is so much that could be talked about personally about Geisel, who was born to German immigrants in Springfield, Massachusetts. He experienced quite the share of discrimination and hate as a child as Americans fought Germany in the era of The Great War, now known as World War I. He lived on Mulberry Street, and it’s been said that on walks with his older sister, other children would throw bricks at them, spout hateful threats and call them names due to their heritage. It’s said he was the final scout in line to receive a medal when Theodore Roosevelt came to town, but by the time it was his turn, he received no medal but a lecture from Roosevelt. Some historians theorize that anti-German people within the town tampered with the medal count that day and believe that incident teamed with the screaming lecture from TR may have led to the classic Horton Hears a Who Line “a person’s a person, no matter how small.”

Throughout many, if not all of his tales, Geisel seems to have a common theme that resonates no matter our age – fairness, justice for what’s right, doing the right thing, and celebrating the differences among all of us. 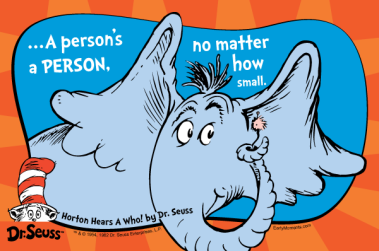 Whether it’s Horton in Horton Hears a Who, trying to save the Whos that are on the head of the flower despite the other creatures of the jungle making life downright miserable and tortuous for him, the Sneetches learning that just because some have stars on their bellies and some do not does not mean that they’re truly any different from each other and can get along, or the importance of opening our eyes to what is around us and seeking out knowledge to better understand people, places and our shared world in I Can Read with My Eyes Shut, it’s all about learning to better understand each other.

So many of these books that we read as children, we now read to our own kids. A well-preserved copy of One Fish, Two Fish, Red Fish, Blue Fish of mine now sits on my son’s bookshelf amid other classic Seuss outings as well as some newer editions by new authors influenced by his trademark style. Most notable of these newer entries is The Cat in the Hat Learning Library series, which our son adores, each book engaging young minds as the Cat and his rhymes teach about everything from bugs, to space, to money, or animals. 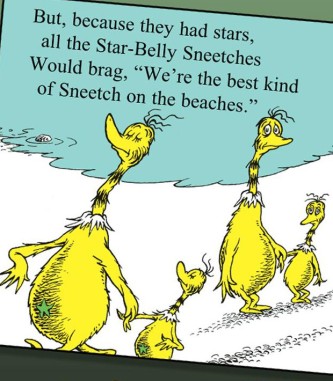 One of the running gags between my son and I are to suddenly take our conversations into rhyming territory, going back and forth, sometimes to a point where he ends up making up his own Seussian type words just to keep the rhyme going.

And while it’s all in good fun, it’s even better to know that some researchers say there’s more than just the silliness behind Dr. Seuss’ rhymes.

“The words that he made up are fun for children — they see the cleverness behind the word construct and the meaning of the word,” said Ann Neely, a professor of children’s literature at Vanderbilt University’s Peabody College in Nashville, Tennessee told Live Science in 2015.

It is true that some parents have concerns about the silly, made-up Seussian words, that it could lead to confusion in children, but Neely goes on to say that all that nonsensical jumble actually helps children on the path to reading, raising their awareness of the sounds that letters make.

“The words that he made up were often funny, and it helps children with their literacy skills later on as they’re learning to read if they’ve heard how language can be played with,” Neely also told Live Science.

She added that the predictable rhythm of the sentences also could play a large  role in teaching children to read.

“That gave children confidence in their own reading ability,” Neely said. “In some ways, it’s like Mother Goose rhymes, in that when we say, ‘Oh, he’s like Humpty Dumpty,’ we know that it’s because ‘all the king’s horses and all the king’s men couldn’t put Humpty together again.'”

Theodore Geisel or Dr. Seuss leaves a legacy that still carries on generation after generation, and as I say, it’s hard to imagine a world without his imagination, his doodles, his rhyme, and his wonderful way to make us all think about the world we share.

“Shout loud, I am lucky to be what I am! Thank goodness I’m not just a clam or a ham! Or a dusty old jar of gooseberry ham!”