It’s no secret that I absolutely love reading to my son.

I don’t know if, at just a few weeks old, his mind absorbs anything of what I’m actually saying so much as just listening to his father’s voice, but either way, it’s one of my favorite parts of the day. I try very much to make sure that at some point in the evening before bed, we get some father-son time, holding him, and reading him a story.

Needless to say, that makes children’s books my Achilles’ Heel. My wife will attest that I could spend the entire day in the Children’s Section of a bookstore, fascinated by all the offerings, both classic and modern. It can be a dangerous thing, I admit.

With that in mind, I wanted to share a few of my most recent finds to add to the little man’s bookshelf. 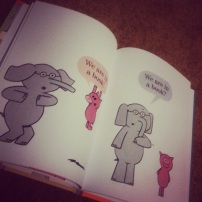 We’re in a Book by Mo Willems

I had never heard of Mo Willems before, but apparently Elephant and Piggie are a series of books, which is great to hear, because I really loved this one. Sat down and read it last night, once to the kid and once to myself because I got such a chuckle out of it.

With cute color drawings of Elephant and Piggie set against stark white backgrounds, the fourth wall is broken as the duo learn someone is watching them and that someone is the reader. They jump for joy that they’re “in a book” and then go into a panic when they realize that at some point, the book has to end. I really, really loved this and think it would be hard for any parent to resist.

Being the open book that I am (all pun intended), it will come as no surprise how much I adore the Mr Men and Little Miss books. I went off on my Roger Hargreaves lovefest in an earlier post, and jumped at the chance when I found this one mixed in with some Berenstain Bears at our local Barnes and Noble, especially since they aren’t carrying the Mr Men series anymore.

So when I came across the last one remaining in the store, I snatched it up quickly. The 13th book in the Mr. Men series, it tells the story of a little boy named Jack, who lets his thoughts run wild when he looks out the window at school one day and suddenly sees Mr Daydream, who teaches him the power of imagination.

I Wish that I had Duck Feet by Dr. Seuss 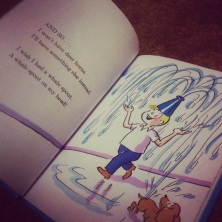 We haven’t read this one yet, but I love the message of it. Published in 1965, it is the story of a young boy who wishes he could have different animal body parts (like a tiger tail) or mechanical body parts (like a water spout on his head). As he thinks about what life could be like with these wishes granted, he also realizes what problems might arise from them, and, in the end, realizes that the best thing to be, is just himself. What can I say, I love a good “be who you are” story. 🙂

So, those are the latest additions to the bookshelf that I’m sure we’ll be pulling off time and time again in the years ahead.

Whether he understands them or not right now doesn’t matter. He’s still developing. What’s nice is that we get to spend time together, as father and son, and that’s a story that I never want to end. 🙂

3 thoughts on “Our latest reads”