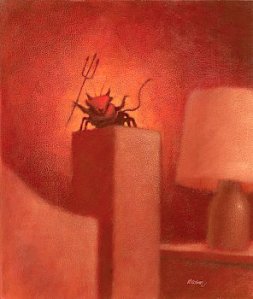 Even the name sounds scary, doesn’t it? Well, that’s because it is, for both child and parent alike.

Fortunately for a lot of people, not every child goes through it, I’m told, and I’ve asked around and found that only a small percentage of parents I ask had a clue as to what they were, let alone had their child go through it. Which is good, because it’s frightening as hell.

My parents tell me that I had them as a kid, but was at least a few years old when they came about. Typically, they occur in children from 3 years old to 12 years old.

For us and our little guy, though, it started very early; within the first few months type of early.

For those who may have been lucky enough to not have gone through them, don’t confuse this with bad dreams or nightmares.

It can sound like normal crying at first, it can sound like a sudden shriek, but what it becomes is a long, arduous bout of exactly what it sounds like – continuous shrieks and screams of absolute terror from a baby who has only been alive for half a year and shouldn’t have to experience such fear, whatever he’s experiencing.

Seeing your child in pain, fear, etc, is hard enough for any parent, but here’s the thing about night terrors – you can’t do anything about them. You just can’t. The baby is not even awake for them. So, here we are, holding this tiny little guy, who is fast asleep, eyes closed tight, with no notion that you’re there showering him with hugs and love to comfort him, as he cries out in fear over and over again.

It gets even freakier and heart wrenching, when his eyes open a little bit during it, even though he is deep asleep and not even close to awakening. We’ve had night terrors periodically for months now, and last night was the first night I saw his little eyes open during them, while still asleep.

Believe me when I say I have never felt such heartache and helplessness as I did looking into his eyes and seeing the absolute terror on his face as he screamed, knowing there was nothing more we could do but hold him close, shower him with love and let him know we were there for him to come back to.

He’s absolutely inconsolable and unable to awaken and it’s quite scary.

I’ve heard a lot about night terrors, from doctors who say there’s nothing that can be done other than allow him to outgrow it to more metaphysical theories of night terrors as the process of babies experiencing trauma from a past life. When I think of that I just think, my god, if that’s true, what type of horror must my poor little guy have gone through in another life to be this frightened and tortured.

Regardless of what’s behind it, both theories prescribe the only thing that can be done – hold him, love him, let him know you’re there.

It’s the only thing we can do.

As gut wrenching as it is in the meantime, I just hope that one day, when I look back at this entry, I will go ‘wow, remember that?’ because the episodes will have become so far in the past, and he will be sleeping peacefully in the other room.