Since the little guy was born, our movie viewing has taken a nosedive. The last movie we saw in an actual theatre was Toy Story 3.

To be honest, if it weren’t for Netflix and our own DVD collection, we probably wouldn’t see anything.

But, with Meg and the monkey off at camp this week and me working, it was sort of like being a quasi-bachelor for a bit. Meg told me while they were away I should re-enact Risky Business. (Although she apparently meant dancing in the living room and not so much the Rebecca DeMornay-prostitute part. Who knew?)

My evenings have been spent not so much in that Tom Cruise/Old Time Rock and Roll mode, but more in a ‘take a deep breath, crash on the couch and veg out watching movies’ mode.

So, a few of the movies that I just don’t feel comfortable watching with the little guy around, and I figure Meg probably doesn’t want to see anyway, have all been on the menu this week. From Captain America to the Avengers, I’ve been having a geek-out film fest with me and the cats.

And I have loved them all. I admit that for being the comic book nerd that I am, my knowledge of the Marvel Comics universe is limited. I was a DC guy growing up. Despite that, I have no qualms saying that Marvel is so far ahead of the game when it comes to their live-action movie franchises than DC is right now. 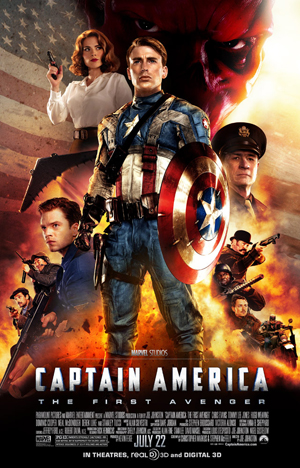 Take Captain America for instance. Set against the backdrop of a propaganda, ‘ra-ra-America! Keep em’ Flying!’ backdrop of World War II, I enjoyed every single moment. I suspended disbelief completely and just sat back and had a terrific trip back in time to fictional 1940s America. I love the explanation of the Captain America persona and outfit as a propaganda piece for the war effort, until alter ego Steve Rogers takes it upon himself to be a real hero. And with a villain as improbable as the Red Skull as the main antagonist (I mean, come on, his head is just that – a red skull), there’s a lot that could have gone wrong. With Hugo Weaving in the villainous role, though, it just fired on all cylinders for me. I should’ve popped up a big bowl of popcorn for it, as it would have been appropriate for this big, explosive, fun piece of comic nostalgia.

As I say, I don’t have a vast knowledge of Cap or many Marvel properties, but I do know how popular he was throughout the war years, with plenty of adventures against the Nazis and the Red Skull. So, I thought it was handled wonderfully in the film when, instead of one adventure/brawl with the skull and that’s it, we instead, through montages, actually see adventure upon adventure of Cap as he takes on the Skull at various points in the war. It never slowed the film down, yet still gave you that sense that Cap was fighting well through the bulk of the war years, just like he did in the comics. And, they even kept things true to the comic history by having him frozen in ice so that he could re-appear in the modern super hero world, just like when creators wanted to bring Captain America back decades after his original run ended in the war years.

I’m so glad I watched Cap before The Avengers, too, as it was the perfect setup for the superhero team extravaganza. I haven’t yet watched Thor, but figured I could get the gist of The Avengers without it. Director Joss Whedon (whose creations of Buffy and Angel, yes, I used to watch week to week when they were on the air) had a pretty monumental task in front of him, as trying to put all these characters (Iron Man, Captain America, Black Widow, Hulk, Thor and Hawkeye) into one movie just, by any account, does not make sense. There is no logical way for it to work, but Whedon makes it work, again just going for pure fun that lets you leave all cynicism at the door because you’re having such a great time watching it. 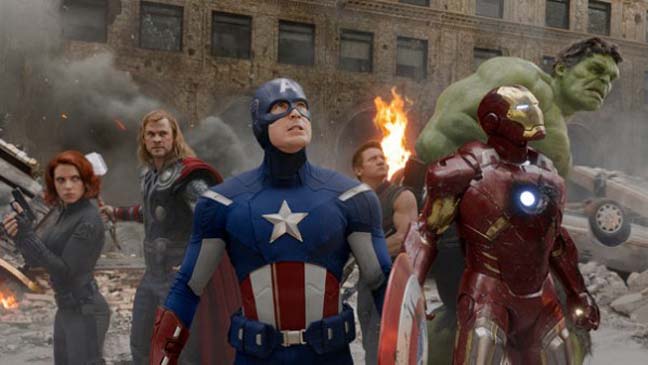 I knew I’d love Robert Downey Jr’s performance as Tony Stark/Iron Man, as I had already seen the first Iron Man movie and fell in love with it purely on his performance.

As I say, Chris Evans surprised me as a wonderfully charming and inspiring Captain America in both films, but another pleasant surprise was Mark Ruffalo as Bruce Banner/Hulk. Wow, what a performance. His suppressive, introverted, socially awkward performance really made you feel for him as a man hiding a monster and trying his best to keep it in check. The man took what could easily be a one-dimensional comic character and made him real and interesting. Bravo, Mr. Ruffalo.

I enjoyed them both so much that now I can’t wait for the sequels…although I’m sure I’ll be waiting a lot longer for them to turn around on Netflix. 🙂 But when they do, I’ll be ready with a big bowl of popcorn and dorky superhero delight.