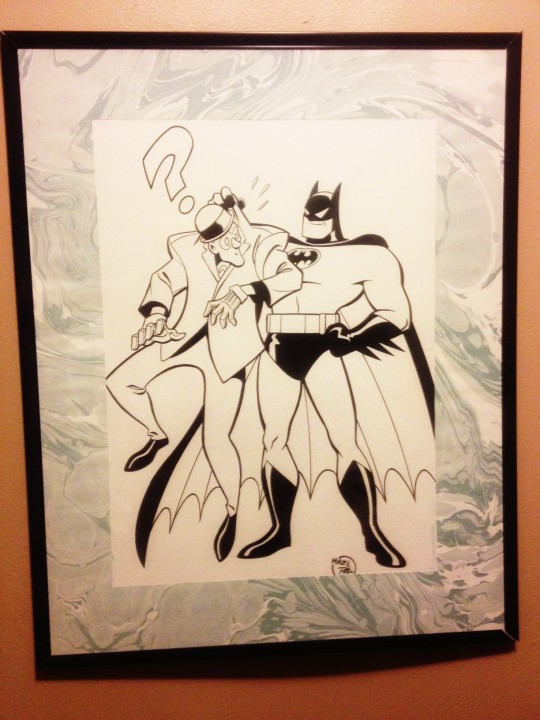 There are some things that you just never part with.

Although I am admittedly a huge fan of purging and ridding the house of things that take up unnecessary space or has just accumulated over the years, there are still a few things that I know I will just always hold on to. Case in point, a particular piece of comic book art hanging in our home office that my son loves to stare at, reach for, and make noises at.

It’s been hanging on my walls in one residence or another, ever since I was 13.

It’s an image of Batman, as depicted in the never-to-be-surpassed Batman: The Animated Series of the 1990s. In it, he’s holding up a confused Riddler by the scruff, ready to cart him off to prison once again.

This isn’t an eBay or comic convention find. No, this was, and still remains, a large memory of my childhood. I won it, you see, in a letter writing contest in 1993. Yes, back in the day when letter columns were still a regular feature in all comic books. The Batman Adventures comic book would hold a contest each month, where the editor would pick two published letters in that month’s column and award the writers of those letters a piece of one of a kind comic art. It was an amazing concept for a young comic fan.

Well, one of those months, a letter of mine had been printed and chosen, and the result was this one of a kind piece, penciled by the late, great Mike Parobeck and inked by a wonderful artist in his own right, Rick Burchett.

Parobeck, a brilliant artistic talent, whether it be from his work on Batman, or my favorite modern-day run of the Justice Society, sadly died in 1996 from diabetic issues.

The work of Rick Burchett has gone on to have graced many a comic page, including a later Batman animated comic series, Batman: The Brave and the Bold and a slew of other DC Comics over the years. His art is graceful and beautiful stuff.

This powerhouse combination of artistic talents wowed me as a kid when I read their comics, and sent me over the moon when this piece of art arrived in the mail. I’m glad to know that their talents continue to be appreciated by my little guy, and hopefully many others in his generation and generations to come.