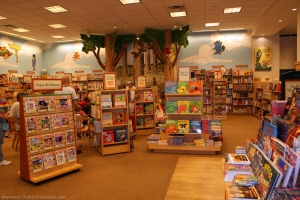 From our last adventure of father-son bonding with dinner at Uno, the little monkey and I then headed to Barnes and Noble.

The image in my head before we got there was of me sipping a coffee, while pushing him in the stroller, looking at children’s books and generally enjoying a calm night of books and bonding.

When we got out of the car, I realized that I had become so used to pulling the stroller out…of my wife’s car. You know, the car that was with her at the theatre. So, no stroller. Okay, no problem. We’d walk it. But that also meant I couldn’t take his big ol’ bag with me since there was no stroller to put it or him in. So, I took out a diaper and a wipe and shoved them in my coat pocket, just in case.

Heading into the store, we ran into a newspaper reporter I know from my newspaper days and we were chatting for a few moments about a recent article he had written and some slack he was getting from the public about it. It was an interesting conversation, but one that was abruptly cut short, as my little guy’s eye caught some children playing with Nooks in the Nook area of the store and pushed himself off of me, to the ground, and sped over to them as fast as his little feet could take him.

He just loves other little kids. His hand flailing in a non stop wave, he kept smiling ear to ear and saying “Hi! Hi!” in that tiny little voice to this little boy and little girl. Their dad, a hipster-looking guy with beard and a knit cap told me the little boy was just a week younger than our guy. It really made me realize how big our guy is. He was born big (10 pounds, 2 ounces), but I really saw it when he was standing there with a kid just around his age who was so much smaller than he.

Then, my son just opened his arms and hugged this other little boy. It was adorable. Absolutely adorable. But then, he wouldn’t stop. This other little boy would move back and here my son would go, arms out, like a cute little Frankenstein’s Monster, ready to embrace once more. I could see the look of fear on the other child’s face and tried telling my son that we should hold off on more hugs and look around some more. The dad was very nice, saying ‘hey, man, hugs make the world go round,” but I don’t think that did anything for that other little kid’s anxiety, or mine as the father of the kid accosting him.

The little girl, slightly older got a hug from my little man as well, and she just so happened to be wearing a Wonder Woman t-shirt. Well that did it for our guy. He kept pointing at Wonder Woman and all over this little girl’s shirt. She was very nice about it, but again, it’s hard to tell when you have little kids, where the line is being crossed from friendliness and cute to overbearing and assault.

I have to admit, I was sort of surprised when Hipster-Dad saw my son falling in love with the little girl’s Wonder Woman t-shirt and said ‘I take it he’s got a sister, huh?”

I explained that no, our guy just likes Wonder Woman. He’s got a Fisher Price Wonder Woman toy and Invisible Jet, along with some other DC Super Friends. Is that weird that I was so caught off guard by that question? If anything, I would have expected a hipster-dad to get the whole no gender slanting of toys thing.  Odd, or maybe I’m just off. Who knows.

With a little prodding, I finally got my son to move down an aisle, but it turned out to be an aisle that was journals and non-fiction books, not to his liking. He started out well, holding my hand, but the minute he realized his place in the store and the destination of the children’s section, he took off, with me chasing him between aisles as he shouted ‘no no no no no!’ when I’d ask him to come back to daddy.

We got to the children’s section and started looking at books. He found old friends Elephant and Piggie, Daniel Tiger, and some new things that caught his eye. But then, he spotted the staple of the kids section at Barnes and Noble – the Thomas the Tank Engine play-set table. Only this time, unlike past visits, there were other children there using it.

Now, I’m sure we all idealize how our children will act, behave, etc and it’s probably always the same. They’ll calmly walk over and say hi to another child, find something no one else is using, and all will get along swimmingly.

I can fool myself for only so long.

He ran over, and immediately started playing with a train car that was part of the train another child was using. And when I walked over and stopped him, was met with a big ‘no no no no no!’ – his favorite new reaction. The father of these children was kind, much like Hipster-Dad up front, and said they were wrapping up anyway and that ‘we’ve all been there.’ The kids left and my little man played for a bit, but with no children around, he lost interest rather quickly.

He let out more energy with a one man show on the stage area of the children’s room, dancing for anybody who came by before heading to a corner to look at Sesame Street books. The night was getting on, and I could see him getting a little tired. I was proud of the fact that we were wrapping up without having bought a single thing. I didn’t want him to come to think of solo time out with daddy as a time to get/buy something. I scooped him up and brought him to the car where we had a pretty calm ride home to the tune of some classical music.

I was feeling like a daddy-failure. I was tired, but you know what? It turned out, he was pretty tired too. And for the first time since Meg rejoined the theatre, he actually fell asleep for me. I read to him, put him to bed and he fell asleep!

Now THAT, that felt like a success, if even a small one. 🙂

5 thoughts on “Barnes and No-buddy, don’t do that!”