While the city sleeps…

It was just one of those nights. No matter what hour the clock ticked away to, it all played out like a CD that wouldn’t stop skipping – the crying from our daughter’s room going on and on as the night stretched to early morning.

Fortunately for us, our son slept soundly through it all. For Meg and I, however, it was a constant struggle of trying anything and everything to soothe her – milk, cuddles, food, singing, touch, rocking, a little medicine thinking it was teething – all to no avail. No matter what we did, she would do nothing but scream. Not just a crying scream, but an angry scream like we’ve rarely heard.

We reached shortly after 2 in the morning when I felt completely out of options, and completely out of our minds. At this rate, I felt, no one in the house was going to sleep. Neither Meg nor I had yet to hit the pillow, and who knew how long our son’s sound sleep through it would last? So, in an act of desperation, I bundled up our 16 month old little lady in her coat and hood, put her in her car seat, and she and I went for an early morning drive. 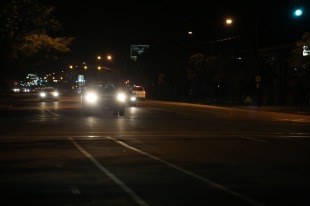 Anywhere and everywhere along the open road was the map of our journey, through the streets of downtown, to the country routes of neighboring villages and towns.

Once we got moving, the savage beast was soothed, enjoying the sights and sounds outside her window, from the street lamps that passed us by to the lights of the theater marquee or the new clock tower downtown. In time, she was asleep, but attempts to park caused her to rustle and start to wake again, so I kept driving, her eyes once again closing, falling back into the arms of Morpheus, our routes sometimes repeating over and over again, to keep her that way.

Fueled from the start by a large McDonald’s coffee (the only place open at 2:30 in the morning in our area, I found, the lights upon every donut shop and cafe with a drive thru darkened), we saw our region as it slept off the worries of the previous day and, as the hours ticked by, prepared for a brand new day. The empty streets that were all ours at the start, by journey’s end hours later were beginning to fill with traffic as people hurried to their morning shifts of work.

Shortly after 6, we returned to the driveway, the sun’s appearance in the sky marking the end of our quest, and the start of our morning routine (albeit a much more caffeine-fueled one) for another day.