There are some downright awesome shirt designs out there for kids. Our two year old daughter’s shirt with cartoon marshmallows joyously leaping into a mug of hot chocolate, or our five year old son’s red shirt with a timeless/retro shiny metal robot swirling through the air leaving a rainbow behind him. Or the the overlapping rainbow silhouettes of a stegosaurus wearing sunglasses.

I have a ball looking at all the fun graphic shirts as we stroll through the kid’s section of stores. And to be honest, as I initially wrote this, I was intending it to be a bit of a gripe with shirt selections for our son as he moves from size 5 to 6.

For a long time I had noticed that those awesome, creative, happy designs on shirts are becoming harder and harder to find once you move beyond a size 5. No, for a while it seemed that once you hit size 6, the clothing industry primarily focuses all its creative energy to the same, tiring theme of “extreme!” or “in your face!” designs that are so eye-roll worthy, I feel like I’m in a bad TV show trying to be hip.

And my biggest question was, “why?”

Why was it that so many clothing manufacturers (and retailers) make such an incredible shift from fun to cliche “extreme!” with the step up from one age/size to the next? Not only from a consumer standpoint, but a cultural one. In a world that could use more thought, more care in each of us, no matter our age, why would we push upon impressionable young boys (I say that because this is mostly seen in young boy’s clothing versus the girls) this image/statement through wardrobe that once you hit six, get ready to be in your face, get ready to be tough, get ready to be extreme?

I’m a believer that variety is the spice of life, but there seemed to be smaller and smaller variety for boys starting at this age. I couldn’t understand why options for young boys were being narrowly limited to skulls and crossbones, camo, or sayings like “prove it!”

It felt as if we as a society push them toward a peg they’re subconsciously told they need to fit into instead of allowing a child of 5, 6, 7, etc, just be a kid, to relish in the fun, the silliness, and imagination that is childhood and allow them to discover who they are on their own, free of the stereotypes that adults seem to think matter.

However, as I mentioned, this may have started out as a gripe, but is turning into some appreciation. I’ve noticed recently that this is now so much the overwhelming case I once found it to be when we’d walk through the kid’s clothing racks at stores. And I’m grateful for that. A trip through Kohl’s young boys section may not have all the cute designs of their Jumping Beans for toddlers to preschool age, but there seems to be much less of the “in your face,” tough guy” stuff I once felt was everywhere I turned while we shopped. The same goes for Target, which seems to, by my notice anyway, increased selection of clothing for young boys with cool geometric and color designs, animals, dinosaurs, and less harsh words and a great focus on discovery and kindness.

I for one am incredibly grateful. I’m sure there are many stores out there too, I just mention these two as a pair of the larger box stores in our area. And of course, there’s always great selections from individual clothing designers that you can find with a little bit of time online. And whether it’s a shift from the manufacturers, the retailers, or just an individual taking the time to shop online through smaller merchants, it’s worth the time and effort. Because spreading even a little bit more happiness through a shirt that makes us smile is the kind of chain reaction of brightness we need more of in the world. 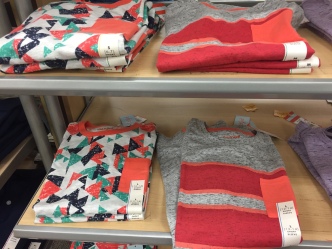 And there is an upside to the question of wardrobe for young boys. Our little guy chooses his own clothes when he gets up and dressed each morning and more often than not as of late, we’ve noticed he bypasses pictures, characters, logos, etc, and goes with solid colors, stripes, or other wardrobe items that remain neutral in their appearance. It may sound a bit bland, but what we’ve come to realize is that his choices allow his own individual personality to shine through, not cluttered by a shirt with a saying, or even that adorable little robot flying through the air I love so dear.

Maybe in the end each child finds what their individual style is, how it fits into who they are, and of course, as we parents all know from our own childhoods, that’ll change time and time again.