I’m not one for resolutions. Heck, I will fully admit how boring I am that I’m not that into New Year’s at all. Not to sound like a grumpy old man, as I have no ill-will towards people celebrating, it’s just that these days, for me, it’s merely the turn of a calendar page. Hey, I think it’s wonderful that people want to make changes in their lives, and doing so when the calendar resets is a perfect time to get us motivated to do so.

As has been the case the past few years, I’ve been asleep before the ball in Time Square even drops. The evening consisted of our recent tradition of ordering totally bad for us Chinese Food and watching a William Powell/Myrna Loy ‘Thin Man’ movie. I tried my best to stay up, even fighting my eyelids to catch the 11 o’clock news. In the end, though, sleep won out.

And I am totally cool with that.

But while I’m not big on resolutions normally (as I usually think we set ourselves up for a lot of disappointment and self-loathing if we don’t achieve them in the time we set for ourselves), the end of the year brought about something in me to want to just live simpler. So, if you want to call it a resolution, fantastic, if not, that’s fine too. Either way, that’s my goal as time moves forward – to live simpler.

I’ve been on a bit of a purging binge the past week. I’ve been going through our bookshelves, DVD collection, my comic books, my closet and just looking at things and asking myself ‘when was the last time this got use and how likely am I to use it in the future?’

I just looked around and realized I’ve accumulated so much…stuff over the years. It’s stuff that at one point in time was great, useful or fun to have but has since been collecting dust for no reason other than some weird mental block that has made me go ‘well, I can’t get rid of THAT…’

We have a pretty small house, so there’s not a lot of extra space. On top of that, I have a very big mental issue with clutter. I just can’t do clutter. When I’m amid clutter or trying to work or relax amid clutter, I just can’t do it. I feel like my mind is just as cluttered as the environment around me and it becomes a fight against anxiety and my mind to try and relax or focus on the task at hand.

It gets so easy to attach sentimental value to things that are otherwise useless because of our memories attached to them. And don’t get me wrong – I’m not advocating going and living in a tent. What I mean is that it was time for me to take a look around at my life and realize how much was just unnecessary and adding to that clutter, physically and mentally.

In terms of how this process has gone, I’ll start with the DVD collection. 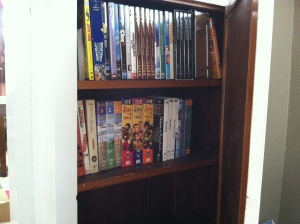 Our house came with two built-ins that have been a part of it since the 1920s. We’ve been using them for our DVDs since we moved in, and those shelves have been overflowing with discs, new and old. So, going one built-in at a time, my wife and I pulled them all out.

Certain items we declared exempt from the purge (Boxed sets like Back to the Future, Christopher Reeve Superman Movies, and Indiana Jones for me, Road to Avonlea, Cary Grant, Jimmy Stewart and Katharine Hepburn box sets for her).

Then, everything else became a one-by-one examination of how long it’s been there and when it last got viewed. After about an hour or so, we had purged a few dozen DVDs from our collection and the shelves have never looked better. In six months or a year, we decided we would re-examine what we kept to see if there is anything else that is just collecting dust and not worth keeping anymore. Honestly, I really didn’t need that copy of Back to School with Rodney Dangerfield on DVD that I bought in college and probably hadn’t watched it since then.

As for books, that one was a bit of a solo project for me, as I only tackled my books, particular my shelf of graphic novels and trade paperbacks. Once again, there were so many that have simply remained on the shelf because I felt some need to ‘have to’ have them in my collection or that one day I might want to read it. But, if after years, that day hasn’t come, it was time for them to go.

The same went for some of my comic books. I’ve kept favorites, but I did pull out many that were just there because I had them for so long. So, I decided if I couldn’t decide, I’d re-read them and if they weren’t something I’d want to read again, they’ll go to – either to eBay or perhaps some store for store credit, who knows? 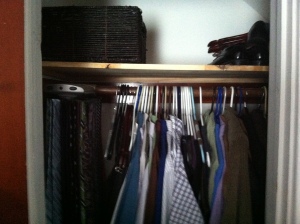 It’s not a quick or easy process, this purging, but I’m giving it my best. Slowly I’m tackling my closet now. It’s not a lot, as I’m never one to really buy a lot of clothes. I realized some time back that I only wear a certain number of outfits in the course of a week and had way more than was needed. I still feel I have too much, but not being too keen on fashion, I tend to need my wife’s opinion on what should go, what should stay, what has more use, etc. In the days ahead, I’ll get it right, but as I say, it’s a work in progress.

All steps to purging out the unnecessary and living simpler.

I can already feel a mental burden off my shoulder as I pull things off the shelves, condense and free up space, and send these items I haven’t used in years off to someone who can use them. At one point in time, each item had some significance, some memory, I’m sure. There are some that it’s still nice to hold on to, some that I will always want to have, use, read, etc. There are others, though, that are just better off living inside my mind as a memory than as a physical object. It’s sort of like when you remember a movie you haven’t seen in years and can’t wait to watch it again. Sometimes when you do, you realize that movie was so much better in your memory than it actually was to watch, and you feel let down. I’d rather keep the memory.

So, with that, I’m going to do my best to just live simpler. Read the books on my shelf I’ve chosen are the keepers (and re-read many that were worth keeping in the first place), use the library for a book I want to read and return, take advantage of modern technology (the internet, Netflix, etc) to watch movies and be done when the credits roll as opposed to having to buy a DVD that gets watched rarely, if at all and just sits.

And best of all, when the clutter is cleared, that’s all time that translates back to me as opportunities to take in the world around me, to write, to explore, to listen to and talk with actual people (as opposed to merely being an online voyeur to their lives via social media), to live life, and to have more time and a clearer head as a husband and a father.

3 thoughts on “A season of purging, a life (hopefully) more simple”