All endings are new beginnings – just one quote among many that I’ve been finding very inspirational as of late.

My son recently pulled a book off of our bookshelf and handed it to me. Whether he thought it was one of his enjoyable adventures through Elephant and Piggie’s world or another attempt by cows to type in Click, Clack, Moo, I’m not sure. Or, perhaps the little wise one just wanted to drop some philosophy bombs on his old man.

The book he handed me was “The World According to Mister Rogers” and is filled with almost 200 pages of quotes and thoughts on life from the man himself, Fred Rogers. I can’t quite remember if it belongs to me, my wife, or if one of us bought it for the other some time back. Regardless, it was a pleasant surprise to have the wee one hand it over recently and plop down in my lap as I opened it up.

While after a few minutes of me reading through quotes, the little guy’s attention moved on to something else, I’ve had the book with me ever since, leafing through page after page of wisdom from Fred Rogers and can only say that as I read more, I am more and more impressed.

I keep asking myself how I can start embracing his view of the world as my own. I think if all of us did, boy, what a world we may live in. Maybe that’s a pipe dream. But if I can do my best to do so, then maybe it’s a pretty good example for my son to see and perhaps do himself before passing it along to another generation and so on and so on.

There’s too much goodness to mention, so instead, if you’ll indulge me, I just want to share some of the thoughts from Mr. Rogers that have stuck out the most so far as I read…

“How many times have you noticed that it’s the little quiet moments in the midst of life that seem to give the rest extra-special meaning?”

“I remember after my grandfather’s death, seeing Dad in the hall with tears streaming down his face. I don’t think I had ever seen him cry before. I’m glad I did see him. It helped me know that it was okay for men to cry. Many years later, when my father himself died, I cried; and way down deep I knew he would have said it was all right.”

“Solitude is different from loneliness, and it doesn’t have to be a lonely kind of thing.”

“All life events are formative. All contribute to what we become, year by year, as we go on growing. As my friend the poet Kenneth Koch once said, ‘You aren’t just the age you are. You are all the ages you ever have been!'”

“The gifts we treasure most over the years are often small and simple. In easy times and in tough times, what seems to matter most is the way we show those nearest us that we’ve been listening to their needs, to their joys, and to their challenges.” 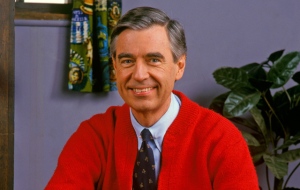