Houston, we have potty 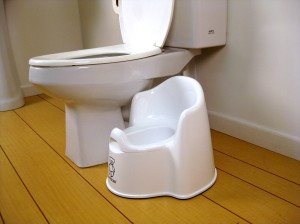 I’ll spare you the more graphic details, I promise.

Suffice it to say, Santa brought the little guy a Baby Bjorn potty for Christmas and we’ve already started putting it to use.

While at first, he just wanted to carry it around the house and use it as a convenient chair when he wanted to sit down, we explained to him each time that it’s actually used for. (Sometimes using the term ‘poopies,’ ‘potty,’ or ‘uh-ohs,’ the phrase he has started using sometimes when he realizes he’s going to go to the bathroom.)

At one and a half, we honestly were not sure what he would understand or if any of it would make sense, but I think some of it has started to sink in. While I don’t see us ditching the diapers anytime soon, we have had a handful of incidents since Christmas (including one at grandma and grandpa’s) where he made it known that he wanted to use the potty. It sometimes involves carrying the potty out to grown-ups, going to it and pointing, or just grabbing his diaper. If we can act quick enough, off the diaper goes and we give it a try.

I know it sounds cliché, but it seems like it was only a week ago that we were in the hospital and I was changing those black-as-tar diaper messes of a newborn. Now, he’s letting me know when he has to go. The changes are coming and their coming fast.

And so this latest phase, the potty training, has begun in its own small way. While we’ve had a few successes so far,  I don’t want to get overly optimistic. I’m certainly hopeful, though. It would be nice if we can keep it up and keep the momentum flowing. (Bad use of words?)