“I’m sorry” – stopping the bad habit of apologizing too much 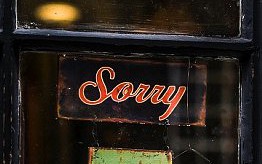 I need to emphasize that – when they’ve done something wrong.

However, I have had a very bad habit for a very long part of my life and that is apologizing for things that are not my fault and needlessly saying ‘sorry’ when something goes wrong that I have nothing to do with.

Someone spills something. “Oh! Sorry.”

You get the picture. Somewhere in my life I picked up the terrible habit of apologizing for things that I had nothing to do with! I’ve tried to break it without much luck at various points in my life but now it has caused a very big problem.

My son has picked it up. 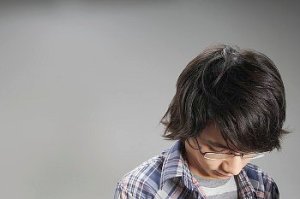 At the age of two, he gets very emotionally bothered when someone else gets upset and has begun apologizing, even if he has absolutely nothing to do with it.

Meg spilled an entire cup of tea on the kitchen counter the other day. It went everywhere – on the counter, under the microwave. She lost her temper, and with that cue, the little guy immediately started apologizing and saying he was sorry, even though he wasn’t the cause of it. She didn’t blame him. He just knew she was upset and immediately started saying he was sorry and getting sad about it.

Because he learned it from me.

I went online to see if I could find others who’ve gone through something similar. What I found astounded me. Yes, there were articles online about constantly saying you’re sorry and its bad effects, but everything I found was aimed at women and talked about how women apologize too much and need to stop. I could find nothing about us men who apologize too much.

I’m here to tell you, it’s not just women who do this. Guys do it too.

So why can’t I find anything online that corresponds with that? I know I can’t be the only one.

Come on, guys. Is it a fear that admitting it makes you less manly, more weak? Get over it and let’s talk about it because I know I’m not alone here.

I have done it for years, as anyone who knows me can attest. And whether you are a male or female, it is a habit that you do not want to pass down to future generations. 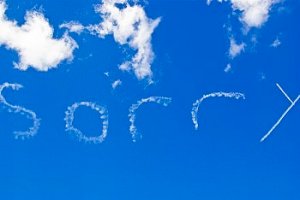 Saying sorry all the time immediately puts you below those around you. It makes you subservient, whether you realize it or not. It makes you seem unfit to lead. It leaves you disrespected.

I think of the culture of the newsroom when I was in journalism. My personality of apologizing all the time when something would go wrong (justified in my mind as a way of showing sympathy and empathy toward those who had something go wrong) turned me into a pushover – easy to target and uber-easy to yell at, criticize, bark at, and tear down. My frustrations in the field often came from the personalities I was up against – big personalities who had no problem removing the word ‘sorry’ from their vocabulary. In an interesting twist which is contrary to the general findings and articles I came across online, a lot of those big personalities in my experiences were not men, but women.

And I did it long before I went into news. I did it in college, I did in high school.

Somewhere along the line I just started taking on the guilt for everything that was going wrong around me, and verbally accepting that. It’s imprisoning.

I often just wrote it off as one of the many flaws in my personality, but now that I see my son, at two years old, an age of discovery, wonder, wild abandon, having these moments, hearing one of us get upset about something unrelated to him and become an emotional puddle of apology, I realize how much this has to change.

And the only way for it to change, is for me to change.

According to an article in the London Standard, a study has suggested that refusing to apologize might actually be good for us. Researchers in Australia found that refusing to apologize led to feelings of power and control which, in turn, led to greater self-esteem. But that study is talking about apologizing when you HAVE done something wrong. And it showed that those who apologized lessened their feelings of guilt and increased their feelings of self-worth, but those who didn’t apologize still had higher self-esteem. 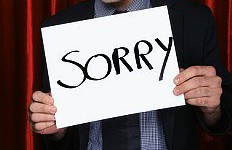 The study goes on to say that people who apologize tend to value harmony and relationships. Okay. Well, that’s true. I do value those things above many others. The gender divide comes up in the study again, noting:

“Men see apologizing as an admission of weakness. They are more alert to  words that weaken their status, while women often see apologies as tokens of consideration,” says gender and language expert Jennifer Coates, emeritus professor at the University of Roehampton. “Women are also more prone to apologizing frequently — even when there is no need for them to do so.”

Well that certainly fits the description of what I’ve been doing for the better part of my life. I’ve used those words as ‘tokens of consideration’ as the professor notes.

So what can I do to break this habit and not raise a doormat kid who takes on the guilt of the world himself?

As Meg has pointed out, it’s not something that will change overnight. It will take time and a deliberate concentration and self-awareness of when I’m doing this and why.

Perhaps I can choose to substitute another word or just stay silent, I have to start wiping that word from my vocabulary when I am not at fault. I put the issue out on Facebook among personal friends to see what kind of responses or suggestions I might get and the bag was mixed, but interesting.

Some of those responses included:

“I used to. Then I stopped caring.”

“Are you secretly Canadian?”

“It’s the stain of original sin.”

“I do this as well. I’m trying to replace it with the more southern “well, bless your heart.”

So how do we accomplish this? Or should I say, how does one accomplish this while still showing empathy for others while taking on false guilt? How do you not say ‘sorry’ but don’t come off as, well let’s be blunt, a douchebag?

I was about to end this here, but then came across an article in the San Jose Mercury News that suddenly made me go “uh-huh,” “yup,” “that’s me,” okay,” causing immediate identification with the person they were interviewing as an example subject.

Titled “Do You Apologize Too Much?”I actually found it to be the most well-rounded and understanding of the issue compared to anything else I came across online.

From the interview subject:

“I hate myself when I apologize so much,” Kuchinskas said. “It happens in the grocery store all the time. People walk around like zombies and bump into you, and I’ll say I’m sorry. I mean, maybe I was in the way, so it was partly my fault anyway. And I’m just sorry that it happened.”

She said she’s not using “I’m sorry” to avoid conflict. It’s more about being polite. “And in this uncivilized, angry society, I’d rather err on the side of politeness.” 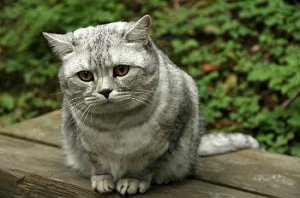 It acknowledged that yes, more women tend to do it than men, but men certainly do it. It noted that those who over-apologize tend to do so out of attempts to be polite, like when you interrupt someone for the time, or feel you might be in someone’s way.

And, as theorized earlier, it confirms that “…those in the fields of psychotherapy and communication skills say issuing a steady stream of “I’m sorry” is mere social lubrication, just to smooth things over and go on with your day. When it becomes a habit, it can undermine one’s self-esteem and credibility in the eyes of others.”

The article comes to a close with some good ideas on trying to overcome that bad habit. I thought I’d share them as well as I move forward to try and put them to use and start teaching my son by example – teaching him that ‘sorry’ is great when we do something wrong, but not what we say when we haven’t. Their tips are as followed.

I’ll let you know how we do.