Most of us remember the tale of the Three Little Pigs, right?

One builds his house of straw, one of sticks and one of bricks and when the Big Bad Wolf comes calling, it’s only the pig in the brick house, who spent the time working hard on his home instead of goofing off and taking the easy way out like his siblings, who the Wolf can’t get to.

At least, that’s how I remember it.

But apparently, I’ve had it wrong all these years.

You see, our son recently received a collection of books based on Rand McNally’s Junior Elf book line published from 1947 to 1986. Some still maintain the original art while others have updated illustrations. And for some reason, our little guy frequently gets drawn to two, in particular, out of the entire set – The Three Bears and The Three Little Pigs. Maybe it’s a numerical thing, who knows.

Leaving the three bears in the woods for the moment, a few frequent readings of The Three Little Pigs recently got me thinking about the story on the page versus the story in my memory – as they greatly differ.

In this book version, recreated from the Junior Elf version in, I believe 1957, the mother pig can not afford to keep her three sons and sends them off into the world to find their fame and fortune.Rather than have any type of intention as to what to do for shelter, each one chances upon people carrying materials along the road – one straw, one sticks and one bricks. And they each build a house. There’s no lesson about planning or thinking ahead, or working hard. Just a chance encounter that leads to how they build their homes.

The story progresses as the Wolf arrives and Pigs One and Two lose their homes (but not their lives) and the Wolf heads to Pig Number Three in his brick house. Just as my memory recalled, he can’t blow the house down. But that’s not where the story ends.

The story then takes a turn as the Wolf, day after day tries to lure the pig out of his brick house.

By inviting him to go places.

The Wolf invites him to go pick beets from a garden and sets up a time to meet the next day. Because, why wouldn’t you accept an invite to meet up with a beast who is standing outside your door and threatening to eat you?

The pig shows up to the garden early and picks the beets before the Wolf even shows up. And when the Wolf tries the same trick with apple picking, the Pig does the same thing, showing up early, but finding the wolf  showing up early too. The pig throws an apple at the Wolf and runs for his life back to the brick house.

At this point, you’d think he’d want to stay inside and away from this wolf, right?

No, no. Because the Pig then accepts an invite from the Wolf to go to the fair.

The pig goes to the fair, early once again – and by early, the books says 2 am early. What the heck kind of fair is going on at 2 am?!

And at the fair, the pig buys a butter churn which, when he sees the Wolf coming toward the fair, he hides in. It tips and goes rolling down the hill, scaring the Wolf, who later, for some inexplicable reason, stands outside the house of the pig and tells him how scared he was that a butter churn was rolling after him.

The pig laughs and tells the Wolf that he was inside the butter churn.

Shortly thereafter, the Wolf tries to come down the chimney of the brick house, where the pig has a pot of water boiling on the fire and the Wolf dies. I tend to skip this part (as I don’t think a two-year old really needs to know that) and just ad-lib that it was so hot the Wolf went flying back up the chimney and ran away. 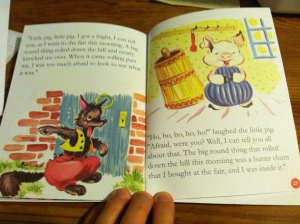 Normally, I wouldn’t feel the need to write hundreds of words about an age-old tale like The Three Little Pigs but it has been handpicked so much recently by my son that I can not shake the strange deviations from the story I remember.

So, I did what I tend to do when something gets stuck in my brain and I just can’t get over the need for answers – I hit the internet.

While the Three Little Pigs was first seen in print in the 1840s, it apparently, is believed to go back even farther than that, but that original version is very much how the printed book we have at home plays out, which I never knew.

I had no idea and yet each time we would read the book, I kept muttering inside my mind “well, that’s not how it really happens. This is weird.”

Nope. I was just wrong.

It just goes to show you how much media can influence your own perspective and recollections, because I am confident I read the book as a kid, but have retained no memory whatsoever of these ‘foreign’ components I mentioned.

All I seemed to remember as ‘the real story’ is this:

So there you have it. Walt Disney has actually altered my memory perception. The Silly Symphonies version of this tale has superseded all recollection of any actual stories I read of this tale.

Regardless, of the three choices, I’ll still build my house of brick, thank you very much. 🙂