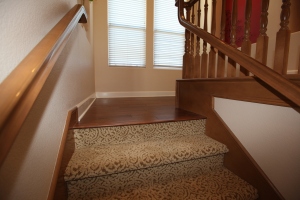 We were headed up the stairs last night, as is pretty much the course at that time of night, on our way to bathtime, when my son suddenly stopped several steps up.

“Move, dada!” he said, fiercely, waiting for me to move several steps behind him as opposed to the usual ‘right behind him to spot him’ we’ve done since he started walking up those stairs on his own.

“You don’t want me behind you, buddy?”

I obliged and went three steps back. And wouldn’t you know it, every few steps, he would stop and turn around to make sure I was giving him that space.

And up-up-up he went.

How quickly the urge to declare one’s independence comes.