Back when I was anchoring the news, we would occasionally have dentists on-set once a month, and when it came to this time of year they’d often have candy-returns that they would plug, where their offices would collect candy and ship it overseas to people in the armed services. In return, kids would be put into the running for contests.

But I can’t help but think that, despite pushing for moderation, there’s got to be some dentist offices filling up with kids who just go overboard with the stuff.

Anyway, that was a bit of a stream of consciousness.

My mind was on candy because this year, we’re trying something a little different. In years past, we’ve always given the option of candy or a comic book, culled from stacks I would accumulate throughout the year to give away. However, as time has gone on, those kiddie comics of the past that used to be so easy to find in “6 for a $1” bins, have disappeared.

So, this year, imagine my delightful surprise when I walked into my local comic shop (where I’ve been going regularly since the age of about 7, when I had to stand on a footstool to peer into the back issue boxes) and found pre-packaged stacks of mini-comic books, ready to hand out and completely kid-appropriate. 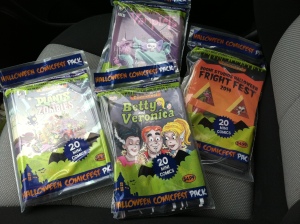 Coming 20 per pack, they had varying titles and topics, but all were labeled ‘all ages,” meaning, it’s okay for little ones to get them. And, I admit, I love the slogan on the package “lasts longer than candy!” You’re darn tootin’ it does. I would have went nuts with glee as a kid if I had gone to a house on Halloween and gotten a comic book instead of a mini Snickers, and in the years past when I’ve given out comics, I’ve smiled ear to ear at having some kids genuinely feel the same way, running feverishly down our sidewalk to their parents yelling “Comics!! They gave me comics!!!” It’s been pretty darn cool.

So, this year, I’m keeping up the tradition, thanks to these Halloween Comicfest comic packets, and Meg has also ordered some Halloween toys (glow in the dark vampire fangs and spider-rings) as an option as well.

So, it’s a candy-free Halloween this year for us, and I don’t think that’s such a bad thing. I like the idea of finding something that’s still fun, but a little bit different for the kids. They are items that can be enjoyed long after the wrapper is taken off and at the same time, safe for everyone, even kids with allergies or diabetes, as has been very popular with the Teal pumpkin initiative as of late.

And I mean, it’s not like we’re handing out toothbrushes. 🙂