Our son has been, I’m not sure what the word would be…categorizing, perhaps? Compartmentalizing?

Some things I’ve read refer to this as “Power Play,” when children start to play in power roles such as superheroes.

According to Preschooleducation.com, this kind of play crosses all backgrounds, economic statuses and is something many, many children go through.

The article states that while characters change, the common characteristics are:

But they also say that children go through it between the ages of four and six. Our son is 2 1/2. And I’m worried that I bear a lot of the blame.

For so long, I’ve been sticking to PBS and Disney shows for him. Sesame Street has been a longtime favorite, and he’s recently jumped into a train phase making Thomas the Tank Engine all the rage at the moment. The toys he plays with the most are stuffed animals, Legos, cars and trucks, a wooden train set, and his Fisher Price Little People. Some of the Little People are generic – a cook, an astronaut, an alien, a farmer, a cow, etc, but some are little smiling versions of characters like Batman, Wonder Woman, The Joker, etc that he received on his birthday. That teamed with my own stuff around the house, he’s seen and recognizes these characters.

So when he saw the box of Adam West 1966 Batman DVDs I got for Christmas, he recognized Batman immediately and went INSANE begging to watch it.

There was plenty of hemming and hawing, until finally I gave in, telling myself ‘well, it’s innocuous enough, right? if I watch it with him, it’ll be okay.’

With its giant props, ridiculous and cartoonish scenarios, I felt like it’s as over the top at times as a Donald Duck cartoon. And I say this all in an endearing way. After all, I’m a huge fan of Batman ’66 myself.

I’ll admit, however, that I have started wondering if this ‘bad guy/good guy’ and ‘me have to fight you’ stuff kicked into high gear because of my allowing him to watch it (always with us there, talking about what’s the bad thing to do, the good thing to do, etc).

Car rides now have him asking me to list off ‘the bad guys from Batman’ or him doing it himself, mumbling “The Joker, The Riddler, Catwoman, Bookworm…” in the backseat and me sitting in the front wondering if I’ve made such a huge slip-up that I’m severely altering my son’s development.

However, it’s also very possible that he might have started doing this anyway, and the names for ‘bad guys’ being rattled off in the back seat could just would have been something else, or something generic otherwise.

I’ve talked to other parents who say their children started these phases early too, but it doesn’t mean I don’t still question my own decisions. So, for better or for worse, I decided to look into this type of play a little more.

In this PBS Parents Expert Q & A, Dr. Michael Thompson, Consultant, Author and Psychologist Specializing in Children and Families, responds to a mother asking about her child often playing the role of the villain when he pretends. She is concerned about him and what it might mean. Thompson’s response is interesting.

“I’m not worried about your son’s gun play as long as it really is play. Children’s play is just play. Play and real violence are two different things. If your son hits people, gets real angry at them, pokes them in the eye, or does scary things to them, that’s a bad sign. If other boys don’t want to play with him; if they leave your house crying, that’s not good. If , however, he is playing with toy guns, running around the house using his imagination, pretending to be someone big and powerful — even a villain — but only only pretending, then I am NOT WORRIED AT ALL. He’s just playing.

You haven’t told me your son’s age, but I think these questions might work for most boys under ten. Is he a loving boy most of the time? Do the teachers at school or preschool tell you that he behaves in class? Does he curl up next to you when you’re watching television? Is he respectful of you and his grandparents? Does he like being read to at bedtime? Does he have good freinds? If the answer to all of those question is “yes” then I am pretty sure that he’s not going to grow up to be a dangerous boy.

Psychologists know that children need to play out many things in their imagination. Boys seem to love to play at being bad, or having super powers. It makes them feel strong and masculine. It is exciting. If you are a good boy in real life, pretending that you are a bad guy can be exciting, because we all have a few villainous fantasies in our minds, don’t we? (Come on, haven’t you ever had a fantasy of breaking the law, or getting even with someone you hated? ) Little boys work these tensions out in their play. And I repeat: It is just play.”

Just as interesting was this research out of the University of Maine that I came across, where children in a preschool environment were observed as the scripts and scenarios for their play was changed over time. Even play that started out as just kids playing with dolls in the corner, over time would have moments of ‘It’s an emergency! My baby has a boo boo!’ and even evolve to children assigning who would be ‘the bad guy’ and ‘take the babies.’ A slightly uneasy teacher went along with it for the sake of the research and found that whether she was assigned as ‘the bad guy’ or if it was to another child, the children always seemed to know and reassure the teacher that it was ‘only pretend.’ It also caused the children to rally and work together to rescue their babies back. I’m paraphrasing, of course, what is a very interesting read, so check it out at the link for something a little more in-depth.

When I first wrote this blog post, it was nothing but self-doubt and self-criticism about my decision and how I felt like a terrible father. With a little perspective from my wife, and more research, I’m finding that the scenario I’m experiencing is not all that uncommon. 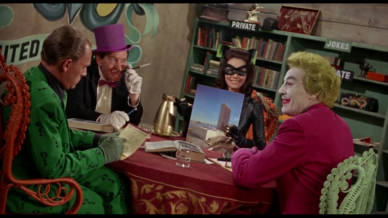 Does it still make me uneasy at times? Absolutely, but that doesn’t mean that the worst-case scenarios playing out in my head are coming to fruition and that I’ve started our son down a path of being a criminal.

It means he is learning how to pretend, he’s categorizing.

He’s not getting violent or even real aggressive. He does seem to be truly playing make-believe. And while I would like it to always be the sort of make-believe like being animals on the farm, or something a little more tame, I’m beginning to understand that in growing up comes the need to feel useful, to feel courageous, to feel you’re being brave and helping others.

And that’s not a totally bad thing. If this kind of play can be turned into examples of ‘doing the right thing,’ then maybe I need to stop looking at it as a potential disaster. Instead, maybe I can look at it as an opportunity to take his creativity and new ways of playing and deepen it, understand it, and talk to him about what he’s getting out of it, observe what he’s learning from it, and be a little less restrictive, until reason shows me I need to truly step in.

I’m going to try, at least. After all, I’m learning about all this just as much as he is as we go along.