Like a breeze it arrived, swift and sweeping (in emotion).

It seemed like only a few weeks ago I was dropping out little guy off for his first-ever day of pre-k and yet, inexplicably, ten months passed in the blink of an eye and there we were, sitting in the seats as he and his classmates, received a certificate that said they were kindergarten-bound.

I was a barrel of mixed emotions. Proud of the little guy who sat before the crowd, coming into a classroom where he knew not a single adult or child last fall, with no anxiety, no fear, only enthusiasm to make friends, explore, and learn. In fact, the only anxiety I can recall from him was not about going to school, but about when having to leave when it was time to come home. Our first few months were a bit painful at pick-up time, as he was enjoying everything far too much and didn’t want to leave it behind for the day. I only hope he maintains that enthusiasm for learning as the years go on.

But back to the present.

Against a backdrop of superhero-themed backgrounds, the little guy and his classmates, dressed in custom-decorated capes and masks, performed some songs, some dance, and eventually were told they were walking off the stage, out of preschool and onward to kindergarten and elementary school.

It was bittersweet, not just for us adults, realizing how swiftly the sands of time pass for us all, but for him too. A week later it’s finally dawned on him that he’s not going back to school on a regular basis and with tear in his eyes he tells us how much he misses it, and his friends.

Added to that, his young world and expectations were thrown for a loop when we told him the weekend following his moving-up ceremony that he would be attending a different school than the one we were planning, the one he had attended multiple orientation nights for, where several of his friends from Pre-k were headed.

You see, the plan all along had been for him to head to work with mommy in the fall at the elementary school she’s been working at this past year. However, about a week or so before his Pre-k ended, my wife’s superintendent informed her they were moving her to an area high school. It meant no school with mommy as planned, and we could either continue to send him there, or send him to the school just minutes from our house.

Sometimes kids take such changes in stride with an admirable adaptability, and other times it’s a slow simmer of sadness as we work our way through the changes to our lives and days. In this case, it seem it’s currently the slow simmer of emotion and change that we’ll have to work through.

And I’m confident we will, but I don’t kid myself that it will take time. Heck, we moved to our new house seven months ago and we still have to have periodic conversations about change not always being bad and to look for the good when a teary eyed, head hanging low little boy starts to bring up why he misses his old house. 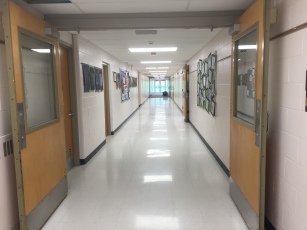 So change is not always the adaptable, easygoing “get over it” that so many folks think is a default for all kids. It will take time. Time, time, time. You are a tricky thing. Filled with good, filled with bad, but most of all, filled with change that keeps our worlds from ever getting boring, and teaching us to learn as we go and figure out how to change with you (even if it takes some of us a little longer to accept) at the risk of being left behind.

Change is the only constant, and I’m constantly astounded by just how quickly it all comes. From the hospital nursery to running through the yard, to Pre-k and now across the stage, cape billowing as a young super hero sets out, up, up and away toward the the next chapter of childhood.