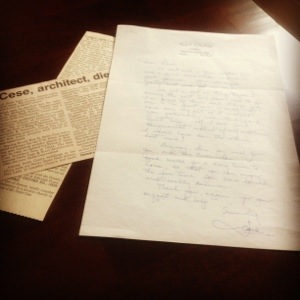 You never know how paths are going to cross.

My wife and I met purely by chance, when a co-worker of mine, when I first started at my current job, convinced me to take part in a community theater production. I made new friends, one of whom, six months later, I would begin dating when we were both single, and then a few years later, would marry and begin a family with.

It seemed like a random meet. I had never heard of the theatre where the show was, knew no one else involved aside from my co-worker, and had it been just a few months earlier at my other job, I would not have even had the freedom to take part, as I often worked nights.

Maybe it was chance, or maybe it was the stars aligning, as we recently discovered a connection between our bloodlines that neither one of us ever knew existed.

Meg’s grandfather has gone into a nursing home and her family has been going through many of his items. Among them, they found a letter, on what looks like the epitome of letterhead from a bygone, Mad Men-ish era.

And that letter was from my great uncle, who was an architect and had worked on many an occasion with Meg’s grandfather who was managing a bank.

It read, in part:

“We can’t end a fine relationship with a quick handshake and a fast farewell. Your wonderful party last week got me reminiscing.

We put a lot of things together during the past ten years – good things. I’m proud of them and I hope you are. My point is – I could not have done my part of it without your patience, understanding and great help. If I had your temperament instead of my impatience, I would have been the retiree last week!

Anyway,my wish for you and (your wife,) is good health for a long time to come, so that you can enjoy the free time you have earned and richly deserve.

Thank you again for your support and help.”

What an incredibly weird, neat feeling to see this note, with my family’s name at the top, and laid out in the handwriting of a relative long since gone. To not only hold a piece of my family’s past, but to have it be connected to Meg’s family’s past was like taking a step back in time ourselves.

Accompanied with the letter were some newspaper clippings and an obituary about my great uncle’s death in the late 80s; of the things he had done with his life, the structures still standing in my hometown that were designed by his pen and ingenuity. Through these, I read about City Hall, my high school, and the hospital where my son was born all having flowed from the drafting table of my great uncle and into a reality.

Who would have thought that decades ago when these two men were shaking hands that generations later, their families would join as one, and have a beautiful little boy that is the blend of both worlds?

What a weird, interconnected universe we live in.