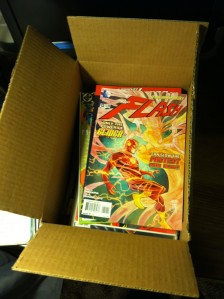 Some comics getting packed up for Operation Gratitude.

I don’t do a lot of holding onto my comics when I’m done reading them these days. It’s rare I come across something I want to hold on to ‘forever’ like I did when I was a kid. And with the proliferation of collected editions that easily fit onto a bookshelf, the number of actual comics in the house has dwindled.

Not to mention how much I love purging. I am trying so hard to bring us down to a simpler, less cluttered lifestyle. I will periodically go through boxes, closets, shelves, and pull out things I have not used in a very long time and see little use for in the future. I’d much rather someone else get use out of it than me hoarding it for no reason whatsoever. Sometimes it’s clothes, sometimes it’s electronics, sometimes it’s books, and sometimes it’s comics.

Clothes and electronics can sometimes go on eBay, but it’s rare that the items are anything worthwhile to take the time and effort to put them online for a very minimal amount of money.

So, often times it’s off to the Salvation Army or Goodwill where, hopefully, others will get enjoyment and use out of these things. Comics are tricky to figure out what to do with, though. I do sometimes keep a pile that can be handed out to young trick or treaters (if it’s age appropriate), but I recently came across something that gave me a great alternative that will definitely put comics into some anxious readers’ hands – Operation Gratitude.

They take numerous items, including comic books and send them off to troops who are fighting overseas in care packages. A little piece of home, a little bit of escapism while they’re out there far away from their families, being real heroes in the world.

So, I’ve recently started putting aside new comics that I’ve purchased and read once, boxing them up and sending them on to Operation Gratitude to make their journey into the hands of the fighting forces. As I’ve done so, I’ve explained to my son what it is I’m doing with the books and where they are headed. How much of it he understands at a year and a half, or will remember, I don’t know, but I feel compelled to show him what we do and why we do it, in the hopes that it stays somewhere in his brain as he gets older.

Hopefully, somewhere in the back of his head he will recall moments like these and be triggered to perform his own acts of donation in some form.

I know sending comics may not be much, but I can imagine escapism is pretty important in the situations the troops are in, so I hope it helps.