Boxing up comics, unboxing me

Little by little over the past few months, we’ve been clearing out much of our home office, converting it into a hybrid office/nursery with the arrival of our newest addition. Packing books up, taking down wall art not quite suitable for a newborn, and taking the numerous boxes filled with comic books and packing them away in our basement.

Part of that process includes protecting them from the elements and time, so each comic is placed in a protective plastic with a flap taped on the back to keep moisture, dust and other undesirables out.

Here and there during a nap time, I’ll take a few minutes and go down to the basement and work a little more on bagging up the books and filing them away in a box, on a shelf, for posterity and safe keeping.

During a recent session of ‘archiving,’ though, I found myself swept away by the various memories associated with these books, accumulated over a lifetime of reading, and yet, carrying with them numerous lives, numerous versions of me, long gone.

With every piece of tape snapped, every comic bagged, boarded and slid away into a box, I realized so with it was a small piece of me. By that I mean it was like flipping through the pages of a yearbook unearthed after years in a box. Many of these books I hadn’t seen in decades. Music playing from Pandora as I worked (some Steve Winwood, some Asia, Phil Collins, all music I used to hear growing up in the 80s, often while I sat reading this comics originally), I was transported to the various parts of my life that coincided with each of these books. 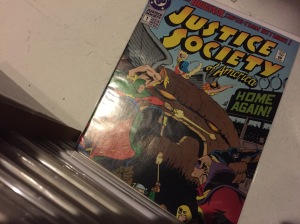 Each one a representation in some weird way of who I was at any given time. Of what I was going through, feeling, of who I was, be it the kid sitting under his bedroom window at 13, wondering if the girls playing down the street were going to come knocking at the window; the 20 year old who, after several years away from them, started picking up comics again while away at college, finding comfort while away from home in things that re-connected me to my childhood, yet opened my eyes to storytelling, characters, and perspectives I had never quite known of (thank you, indie comics); the 24 year old, out of college, trying to find his place in the world, thriving on creating art in the form of low budget filmmaking, yet finding inspiration and solace in the full-color panels of the comic pages; or the 27 year old single journalist, coming home exhausted, wanting nothing more than to crash on the couch, casually grabbing a floppy comic book from the ever-growing reading pile on the end table as time started becoming more of a commodity.

Or today. Though the books are incredibly fewer than ever before, the reading piles still add up with the day-to-day responsibilities of a worker, a husband, a father, a homeowner. They’re still there, though. Connecting the me of today with all the mes of the past.

I have been so many different people in my lifetime already. A son. A brother. A friend. A student. A newspaper delivery boy. A restaurant host. An actor. A library aide. A coffee barista. A film projectionist. An indie filmmaker. A newspaper reporter. A comic book writer. A news anchor. And a father.

Sometimes it can be difficult to reconcile all of those identities into one being today, the same yet different in so many ways.

This is not necessarily a negative thing. What it is, I think, is a reminder.

We grow, we change, we learn from our experiences and transform into a new being made up of and shaped by the lessons, mistakes, and thoughts of our past. We shake away the being we are unhappy with, even in the smallest of increments, on a never-ending journey to transform, to become better. In effect, the old us dies and is reborn as something new, molded by our experiences.

We all have our own “comics,” our own items carried with us throughout our lives that carry with them the remnants of our own past.  And when we occasionally uncover them, it’s like an archaeological dig to rediscover when we were, where we were, who we were, and most importantly, who we’ve become.