You ever feel like you spend so much time taking pictures of videos of a moment that you never really lived it?

I have. Plenty of times.

Living behind a lens, watching wonderful moments unfold, hurrying to capture them for all eternity, only to realize afterward that you never truly took part in it, not that way you really want to, not all in.

Each year around the little guy’s birthday, I take all the photos and videos from the year before and compile a memory video of the previous year. Luckily for me, he loves them, and frequently asks if he can watch them.

I’ve read that researchers found talking to your kids about experiences and things you’ve done and letting them talk about things they’ve done is a way to help make sure the memories of childhood don’t fade away into oblivion.

“Conversational style matters, because when children remember and talk about the past, they effectively relive the event—they fire the same neurons and reinforce the same connections” Nicholas Day writes in this account on Slate. “They are buttressing their memory of the event. And when parents scaffold their children’s stories—when they essentially tell the stories for their children, as a highly elaborative parent of a very young child would—they are reinforcing those same connections.”

Part of me hopes these videos will serve a similar purpose, reigniting memories of these experiences, reinforcing the memories in his mind so they don’t become dust in the proverbial wind.

Not how you should experience a concert.

It’s usually a pretty big undertaking to go through everything of the first year, and it was only now, as I made a “Year Three” video that I organized as I went along, dating and labeling each photo and video and putting them into month specific folders so that I’d know where everything was when it came time to make the video.

The first year was about ten minutes long. Year two was about 15.

Year Three proved to be a problem. The rough cut was an hour and nine minutes.

Even with additional weeks of editing and cutting, I still only got it down to 49 minutes long before I had to give up, export it and be done for this year.

But it made me realize that I had a really big problem. And that problem is that I have/took way too many videos and photos. The year before I felt like I hadn’t taken enough and now I had footage and photos coming out of my ears!

So it was time to reevaluate.

I’m still going to make the annual videos. They’ve now become a tradition in our household. But the experience has made me realize just how unnecessary so much of what I captured was. Sure they were fun little moments, but as the images flickered past me on the screen, I realized how many were moments that the little guy was relishing while I just stood back and observed, rather than taking part the way he wanted me to, the way I should. 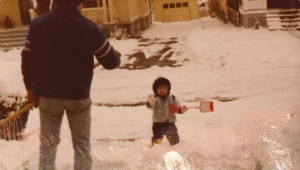 Me circa 1981. There was only this one in the album of that day. If this was today’s digital age, you’d probably find about 25 from that afternoon.

It’s not bad to take a photo of a good time to share the memory. But with photo and video cameras built in to every smartphone these days, it’s become increasingly easy to do nothing but. How many pictures of people’s meals do we see online? Would you really have taken photos of that dinner and pasted it into your photo album 20 years ago? I wouldn’t.

And that’s the point.

The ease at which we can capture moments has made it just as easy to lose focus on which moments are really worth capturing.

So I’ve made a resolution. A picture or small video to commemorate a really fun or memorable time/outing/event with the little guy or the whole family is one thing. But not a dozen. And not everything. Because let’s be real – I’d much rather be out there in the backyard or at the park running around with him and having fun than trying to get the perfect shot to remember it later.

Here’s hoping for more fun and a shorter video next year, but even more memories and experiences. 🙂