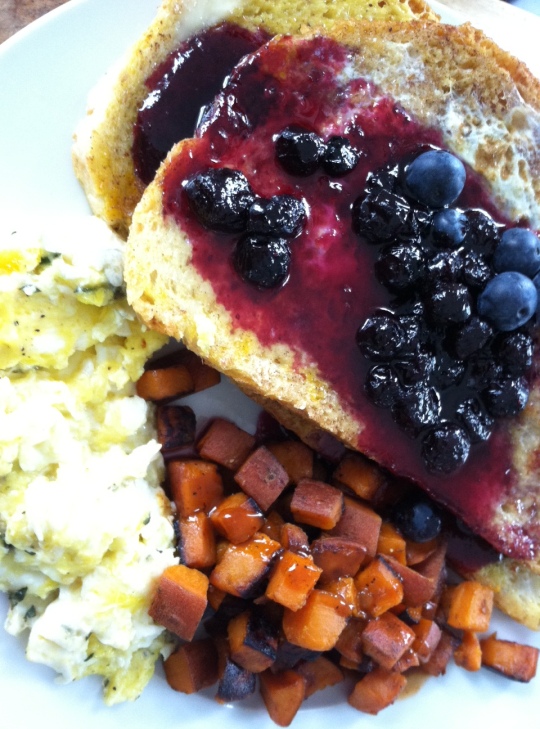 The breakfast my wife made for me on Father’s Day.

Yesterday, Meg and I took the little guy to a public market (sort of like a farmer’s market, but with additional things like crafts and other vendors alongside the farm stands). and since it’s held outside in the courtyard of a train station, we got to enjoy the beautiful sunny day to the utmost.

Then, we ran some errands that included me finally getting a new pair of sneakers and jeans. You see, I hate spending money on clothes. I really do. I often end up getting updates to my wardrobe at Christmas because I just don’t buy any during the year. I like to see just how long I can make something last, including articles of clothing. It’s just the kind of thing I don’t put much thought to throughout the year, to be quite honest.

With that said, I’ve had the same pair of sneakers for several years, wearing them down to pretty much nothing. I tend to do the same with my jeans, which is why, for the longest time, I had one good pair of jeans and the rest had holes in the knees and became relegated to housework or lounging at home. So, it was pretty momentous to walk out of the store with a pair of sneakers AND a pair of jeans, not to mention a polo shirt, which my wife insisted on paying for as part of Father’s Day, which was incredibly nice of her.

Pretty crazy, for me at least. Though I think Meg just thinks I’m plain crazy.

We ran a few more errands throughout the afternoon before meeting up with my parents for an early Father’s Day dinner for my dad. We gave him a framed picture of the little guy for his desk at work along with some fun smoking accessories for his grill.

I had to duck out late in the evening to fill-in on a partial shift at work, but came home, hit the sheets and actually slept in for a change.

When I awoke, it was to some both funny and touching Father’s Day cards from my wife, my little guy, and yes, our kitties. A big breakfast of French Toast, eggs and hash browns and I have been completely and utterly spoiled.

It’s been wonderful, it’s been more than generous, but honestly, the fact that I get to celebrate Father’s Day is certainly enough for me. Having them all in my life is worth more than any card, gift or breakfast. Not that I’m not thankful for the creativity and generosity, I’m just so incredibly thankful for all of them.