That title totally sounds like something out of an episode of the 1966 Batman TV Series, doesn’t it?

“…but the Riddler’s clue, Robin. When is a door not a door?”

“When it’s ajar! He’s going to strike at the jarred fruit exhibit at the Gotham Pavilion!”

“I don’t think so, Robin. That’s too obvious. No, his devious mind works like an onion. You must peel back the onions to get to the core of his twisted scheme.”

“Ajar. Ajar…wait, Batman! Isn’t millionaire explorer Thaddeus A. Jar showing off his priceless collection of souvenirs at the Gotham Millionaire’s Club this afternoon?”

And yet, it’s all I could really come up with.

When is a door much more than a door?

When it gets me so darn excited, that’s when. 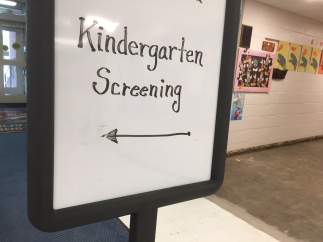 We’ve been making a lot of trips recently to what will soon be our son’s new elementary school for a series of Kindergarten nights designed to get the kids used to the environment, to the lessons (lots of tactile activities, games tied into words, letters, etc), and getting to know their soon to be teachers and classmates.

It’s been enjoyable on many levels. We’ve loved to watch him start up conversations with the other kids and take to the games/activities so well. He loves a new adventure, that’s for sure. There’s an excitement to the idea of a new start, of the next chapter, and that’s certainly what it is as we wind down the last few weeks of pre-school, a concept I can’t quite fathom yet, and will likely have to ponder in another post upon graduation.

But you’re going to laugh when I tell you that one of the things that got me the most excited during one of these kindergarten prep nights was…just a door. Sure, the nostalgia of a small school, the same hallways, decorations and smells of the ones I remember as a kid sent me swirling into a delirium of reminiscence. But it was when the little guy asked to use the bathroom and I showed him where it was that I had my mind blown.

There, in the bathroom, were of course the sinks, the standard toilets, etc. But then, as if rays of sunlight poured out of it, was a stall with a urinal. Yes. A urinal within a stall, with a door that closed. And if you’ve ever been in a public bathroom with your son, standing at a urinal with his pants around his ankles and his bum sticking out for the world to see, you’ll understand why I thought this was such a cool concept.

Look, they’re still little and they’re still figuring things out, and that includes things we take for granted as adults, like knowing how much/little to show in a public bathroom.

So, yeah. I got so excited about a bathroom stall door, I had to write about it.

I should get out more often. Who knows what I’d find.