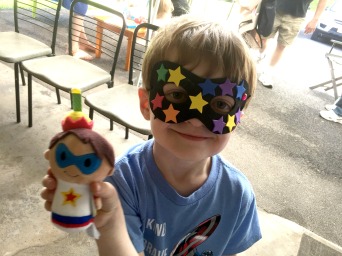 We recently had a birthday party for our little guy. It was the first time we ever actually had it at our house. Usually we relied on the kindness of grandparents on both sides to get us through over the years, as our house had long been too small to have anyone over beyond a group of 2 or 4.

With our new digs, though, we figured it was finally time to give it a try, and try we did, not only with family, but this time inviting some of his friends from pre-k to come as well. And was it ever worth it to see the look on his face when he was surprised by the arrival of each of these friends.

Rain the day before and morning of forced us to change up plans a bit, moving from the backyard to the garage. Well, after it was emptied and cleaned out, of course. Then with two pop-up tents from parents placed outside the garage door, and tables and chairs inside, we were good to go as family and friends arrived for this gathering of little heroes.

The theme was his choice (Superheroes), brilliantly executed by Meg with foods that added a heroic flavor such as Captain America Shields (circle pretzels with white chocolate and a red, white or blue M&M in the middle), kryptonite bars (rice krispies treats with drizzled white chocolate and glowy green sprinkles), and some foods that gained their super powers through some signs I made using the PicMonkey app on my phone and a variety of superhero images. 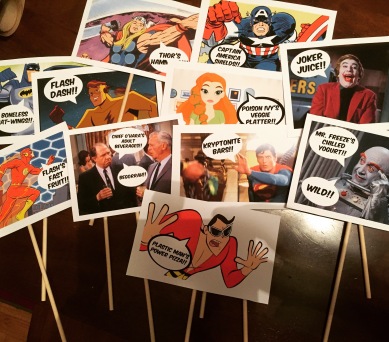 Meg also took giant cardboard boxes leftover from a swing set we assembled the week prior and created a backdrop of buildings for little superheroes to have their picture taken by.

The kids crowded around a table to color super hero print outs, ran around wearing paper super hero masks from Party City and even enjoyed the arrival of a little sunshine just long enough to dry out parts (emphasis on parts…watch your step unless you like mud) to get some time in running through the backyard.

Oh, and never underestimate, much like the crayons and coloring pages, how something as simple as a worm coming out of the ground can create a fascination in a group of children that can be hard to pull them away from.

And when it came time to open gifts and he had oohed and awed over various toys, Legos, and books, I gave him a gift I had spent the past several months putting together for him.

You see, back at Halloween, he designed his own costume, which Meg made come to life – a superhero version of himself.

But post-Halloween, something wonderful happened. He kept the character going, imagining new adventure after new adventure, as well as a rogues gallery of villains that he was going up against with each backyard or bedroom crime fighting spree. I did my best to covertly take notes of the superpowers, the villain, and turned it into a script for a short comic book story.

I then dusted off my drawing pencils and illustrated the story, handing it over to my good friend and collaborator on two indie comic book series, who graced it with his inks, colors and lettering skills. From there, I sent it out to a comic printer, and upon return, had a limited edition comic book of my son in his super hero persona, solving a mystery, overcoming the very villains he’s created as he plays, and making it to his birthday party to find family and friends waiting.

The shock on his face “Wait…what…how did…how did you get a comic book of…me?” when he opened it was everything. The fact that he asked me to read it for him four separate times that afternoon and again before bed was everything else.

With each passing day, he grows a little more, shows me more of the world and myself than I thought possible, and though not every day is perfect for us, every day he becomes more and more my real-life superhero.

One thought on “A super party for our super hero”