Did you watch PBS when you were a kid?

I did. I certainly can’t remember all of my viewing habits, but I can tell you unequivocally how comfortable, safe, and accepting it felt even as a toddler to be joined by furry friends on Sesame Street every afternoon. Or how I would run to grab my sneakers to tie and sweater to zip up when Mister Rogers would come walking through his door to open up windows to the world around us and remind us what it mean to be a kind, caring person throughout this thing called life.

I remember when Big Bird and I both needed clarity about Mr Hooper not being on Sesame Street anymore and how it’s okay to feel sad about someone leaving our lives, that grieving is a natural part of our emotions when someone dies. To this day I can’t see that scene where the grown-ups tell Big Bird that Mr Hooper isn’t coming back without feeling the same thing I did all those years ago. The handling of the topic, from producers to writers, to cast and crew, remains incredible.

Beyond those shows, I can’t recall too much else that I watched. Maybe Romper Room, and when I was older a show called Square One, mostly because of a series within the series called Mathnet, a Dragnet spoof where math problems were used to solve mysteries.

And now 30+ years later, I can say with certainty that there’s never been a better time to be a PBS parent.

We still get new editions of classics like Sesame Street, going strong at almost 50 years old and still teaching not only basic skills like shapes, numbers, and letters that prepare a child for school, but lessons to hold onto our entire lives, such as kindness, acceptance, and staying true to yourself. And my wife can attest to the childlike glee I get when we see familiar faces like Bob or Gordon pop into even some of the newer episodes. 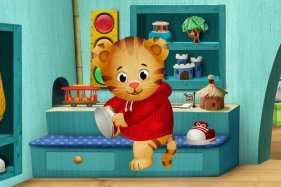 Of course, there’s so much new and exciting on PBS too. While my son enjoys the derring-do and superheroics, I laugh at all the hilarious situations and jokes as WordGirl tries to put villains, bad grammar and misused words to rest.

Ready, Jet, Go has not only kindled a fascination with space exploration in our son, but it has captured the attention and awe of our not quite two year old daughter as well. And, I for one, feel I’ve learned so much as an adult about our universe and the vast possibilities that await us beyond the stars thanks to Jet, his parents and friends, and Astronomer and Host Amy Mainzer.

Nature Cat revels in its silliness while showcasing how much fun can be had and how much can be learned simply by heading out to one’s own backyard, along with a little help from our imagination. It also features, I’m convinced, at least half of the cast of SNL.

Chris and Martin Kratt leap from live action exploration of the animal kingdom into an animated world that stresses the valuable balance of our ecosystem and the role that each animal plays within it. Along with that, of course, comes with the threats to that delicate ecosystem by human kind and those who wish to prey upon the animal and natural world for their own greedy gain. The Kratt Brothers have not only transformed our son into a walking animal encyclopedia of habits and interaction, but have made him aware at such a young age to think about his actions or the actions of others, affect the world around us.

And of course, there’s my favorite, Odd Squad, which I’ve gushed over many a time before, about an agency run by kids that uses math skills to solve problems of oddness in the world. If it’s a man with a fireplace in his stomach, a person with a laugh track following them around, or dog-obsessed villain looking to take over the world, Odd Squad is on the case. With it’s clever writing, excellent acting, and delicious sense of humor, any adult should be watching this show, regardless if there’s a kid in the room with them.

Then, there’s PBS Kids Family Night, which, in our household at least, has become the modern day equivalent of The Wonderful World of Disney that my wife and I enjoyed watching each week as kids. Family-friendly specials, movies, or marathons every Friday night (and rerun Saturday and Sunday night if you miss it) on the 24/7 PBS Kids Channel that have become ritual viewing for us. I pull out the air popper I bought almost 15 years ago, make a bowl of popcorn and we all gather in the living room for anything from Tiger Family Trip to Odd Squad the Movie, or Wild Kratts: Hero’s Journey. Our kids are already chomping at the bit to see the upcoming Ready Jet Go: Return to Bortron 7 coming up on a Family Night edition soon.

We have basic cable, and when we downsized (long before we had kids), we never looked back, finding all we needed in our television viewing right there on that handful of stations. And when we did have kids, PBS (and now PBS Kids, their 24/7 accompanying channel) became the default for children’s programming.

And I wouldn’t have it any other way.

PBS matters. It offers a gateway to the world for anyone with a television set. No premium channels and the associated pay along with it. Whether it’s arts and culture, or math, science, and reading – knowledge never goes out of style. It’s what allows us to understand one another, to find new ways to think, to move our world forward. And I can’t think of a greater way to use the power of broadcasting than to by empowering our children and future generations with the tools to keep our world, our society, ever moving.

One thought on “There’s never been a better time to be a PBS Kid (or Parent!)”