I really hate letting things go to waste. Yes, that statement is at odds with my aversion to clutter and desire for less, but in this particular case, I’m thinking about food. It never fails that when garbage night rolls around each week, we find ourselves with some slices of bread that’s starting to go, or fruit that’s past its prime and starting to turn. In times past, this may have found a home in the garbage bag while our sense of regret finds a home in our minds. But recently, I’m pretty proud that we’ve been finding a way to make sure that even those items get a new life or use.

And the answer lies right outside our kitchen window.

Stopping by for a late night snack.

In our new digs of the past year, we’re not that far from some wooded areas and in the middle of the night last winter, up with our second child who couldn’t fall back asleep, Meg looked out the bedroom window to see a deer staring back at her. Since that night, throughout the winter months when food is not as plentiful in the woods, they come as one, sometimes in packs of three or even five and feast on the sunflower seeds in the bird feeder hanging from a tree in our backyard.

So now when that (non-citrus) fruit starts to go, or when the kids want an apple but don’t finish all of it, or even the apple core I have left over from lunch, out into the backyard it goes under the tree, where the next morning, if not within a few hours, it’s disappeared, gobbled up by our neighbors the deer, or squirrels, or perhaps that plethora of beautiful birds that frequent the place. 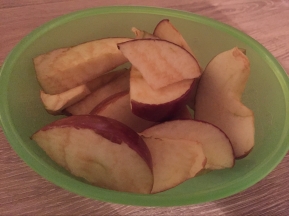 Leftover apples from a kid’s snack earlier in the day.

Will seeing me find an alternative to tossing away the leftover fruit rub off onto our kids? I don’t know. I’d like to hope so. Sometimes it feels like it’s an uphill battle to try and keep this planet in better shape than we found it, but if something like not throwing out certain types of food that makes a welcomed meal to the wildlife outside our door can make even a small difference, I’m all for it.

No use crying over spilled…juice?

Going out to eat can sometimes be a three-ring circus with a nearly one year old in tow.

We especially learned that this last weekend when we tried to do dinner at a restaurant we had gone to a few times in the past with the little one. While he has often been great while we go out to eat, complete with flirting it up with the waitress, lately he has wanted nothing to do with it.

He kicks, he groans, he wiggles like a worm to get out of your grasp, and will strain every muscle in his body trying to get out of a high chair.

This morning, Meg and I went to breakfast with the monkey while we waited for my car to get its annual inspection. No sooner had the little guy been given his bottle did he decide to throw it on the ground – a hard, tile floor – causing it to shatter and glass to go everywhere.

So there we were, Meg with paper towels, on the floor of the cafe, cleaning up apple juice while I asked for a broom and dust pan to clean up the shards of glass.

And this was all before we ordered.

We thought we were in for one heck of a ride, but then, one packet of food later, and a whole lot of ‘ooing’ and ‘awing’ from passersby in the cafe, and he went from fit-to-be-tied to hamming it up for the public, with a head tilt and a smile, as if nothing had ever been wrong in the first place.

So, yup, back to normal, although we think we’ve narrowed down his sudden change of attitude while out and about – all signs point to us teething again.

.She’s an American journalist who moved to France with her husband where they gave birth to a daughter and two twin boys and quickly learned about the vast differences in culture, parenthood, and child rearing in France versus in America.

Druckerman covers a wide variety of topics in the course of her three kids’ arrivals into the world, but one of the most reoccurring observations is how calm and collected children in France are in contrast to the American parents often found chasing their kids around the park, the house, etc. They refer to it as “being sage,” a sense of calm in a child, whether they be at home or out in public.

From the French culture, she learns that parents give their children rules, but it’s a limited set of rules. Those rules are important and very strict, but there is freedom within those rules. For example, one example from her French friends is children having to be in their room at a certain time each night. Now, the children may play in the room, read, etc, but that’s where they go, to the room. The method behind this is that, eventually, the children will get tired and know it’s time to climb into bed and go to sleep. The line of thinking is that this sets up boundaries for children, but is not overbearing enough where they feel they have no freedom. Rules, with freedom within the rules.

Another big topic throughout Druckerman’s journey is food. American children can be notoriously picky eaters, but she finds that by starting children off with real food at an early age, and having them try new foods, adult foods, even if it’s puree early on, will develop an open-minded taste palate in children. She even recounts how many kids in restaurants in France aren’t offering off of some ‘children’s menu’ of pizza, chicken nuggets, etc, but real food off the real menu. Very very fascinating.

I’m really just cherry picking two topics that stood out the most to me in the course of her book.

So, is it possible?

Druckerman finds a way to take the good of the French style of parenting and blend it with her own American upbringing, but she does so why she’s living in France, a place where all children take part in a grand lunch so that their meals at dinner aren’t as large. There’s even a gouter in between. French kids don’t graze throughout the day like the American kids constantly walking around with a bowl of Cheerios. They have their breakfast, their larger meal of the day at lunch, a gouter (snack) in the afternoon, and then a smaller dinner.

And just because they are better behaved and understand that they have their own lives as do their parents, the children don’t appear to be automatons from this. No, they seem to be joyous, fun-loving little people, thoroughly enjoying life.

However, Druckerman does this while living amid the French culture for years, surrounded by the system that was already in place and having to adjust their American ways to it.

But what about Americans living in America? Do we have to pack up and live in Paris in order to make such a switch in the way our children grow in these aspects without American ‘norms’ getting in the way? Is it possible without peers and family saying that it’s “not how you raise a kid?” because it’s not how we were raised?

Now, notice I used the term “cherry picking” earlier. I did this for a reason, which is that I’m not making a blanket statement that I feel everyone should run out and do absolutely everything that the French parents do, or even what Druckerman’s family did in this book.

In fact, here’s an article from Forbes completely blasting the book, saying the methods take away a child’s individuality, promote socialism and promote forms of child neglect.

I can’t say I agree completely with that author, Erika Brown Ekiel, either.

Like much of life, it’s not about blanket statements or ideas that are cure-alls. It’s about finding your personal balance and what works for you.

For example, I love the idea about raising a child who loves the idea of exploring new foods and tastes, who aren’t raised on the kids’ menus of pizza and chicken nuggets. However, as I’ve stated in the past, I’m not a fan of the “crying it out method” when a child can’t sleep.

I like the way that  Druckerman describes the French authority of parents, creating a framework with a few key phrases throughout their childhood that produces those well-behaved children who are still having fun with the other kids, at the park or playroom. However, I’m not a fan of the dismissive nature of breast-feeding, as it comes across in the book, as I’m a big proponent of breast-feeding for mothers who have the ability to do so.

There’s a lot of question marks up in the air and you know what? Neither one of the authors I’ve mentioned (the book, or the article disapproving of the book) has all the answers. That’s why we, as readers, as consumers of knowledge, have to take in what we can, digest it, and discover what is appealing and useful to us, and what might not serve us well in life.

Maybe the best way to end this one is simply to say c’est la vie!