Get yer ice cream? No thank you 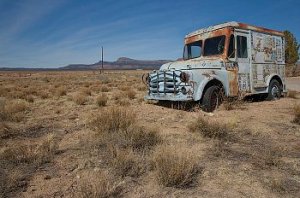 There is just something inherently creepy these days about the Ice Cream Truck coming down the street.

If you’re an ice cream truck driver, I apologize. It’s very likely not you. Or at least, I hope it’s not you.

Oh, I’m sure that back in the day it was an innocent and smile-inducing moment to see that white truck making its way through the neighborhood, music and bells ringing through the air. Heck, even I remember just two and a half decades ago, how normal it seemed to have the ice cream man come down the street and eagerly await to get some cold treats in the summer.

Through a little internet searching, here’s some background on the ice cream truck, or ice cream van as it’s sometimes known.

Early ice cream vans carried simple ice cream, during a time when most families did not own a freezer. As freezers became more commonplace, ice cream vans moved towards selling novelty ice cream items, such as bars and popsicles. Early vans used relatively primitive techniques: their refrigeration was ensured by large blocks of dry ice so the engine was always turned off when the van was stopped for sales. The chimes were operated by a hand driven crank or a take-off from the engine, so they were not heard as often. Modern chimes are always electrically operated and amplified.

I know it’s too much to ask for it all to still seem like this, but…

There are different types of ice cream trucks currently in use in the United States, some simply novelty trucks and some are soft-serve trucks.

Professionally built ice cream trucks that sell prepackaged product (Novelty Trucks) use commercial cold plate freezers that plug in overnight and when unplugged maintain the cold for at least 12 hours. Music systems are mechanical, such as pianos, or more commonly digital devices that have no tape or other moving parts. Each “music box” may be able to play one or multiple tunes. The opening on the side that drivers serve from is commonly referred to as a serving window and will usually have a serving counter. Awnings can be attached to trucks over the serving window. Safety equipment usually comes in the form of an electric or vacuum swing out sign which may resemble a stop sign or a triangular shape, as well as vinyl lettering or decals that advise others to use caution.

These are the only types of ice cream trucks that I’m familiar with in my own youth, cruising up and down the street, making me bug my parents or grandparents to buy me a Pink Panther ice cream on a stick, shaped like his head, with pink and white ice cream, and bubble gum for eyes.

Soft-serve ice cream trucks are actually a whole foreign concept to me. Instead of the pre-packaged ice creams, they actually have soft-serve machines in them and can offer you cones and sundaes. Honestly, I think I would’ve liked this a lot better than the pre-packaged stuff. They aren’t seen very often in the U.S. because of the extra costs with building such a truck. Oh, U.S. – cheap, cheaper and cheapest. Aesthetics and quality never really come into play here, do they? It’s a shame.

Maybe because of that desire to keep costs low, those ice cream trucks don’t always hold up well over time, which certainly doesn’t help deter the creepy factor I now see as an adult, the run-down rusty-looking truck barreling down our street at speeds quite unsafe for children who may be running out into the street to follow.

Or perhaps it’s the Dateline culture we live in these days, the numerous kidnapping stories splashed across the headlines, the horror movies made on the subject. As an adult, I just raise a skeptical eyebrow when I hear the jingles of the ice cream man coming down the street.

Honestly, maybe it’s the fact that he comes down the street at 9 o’clock at night, when most young kids, I would think, are safe indoors, that makes me raise a cynical eyebrow.

I think we’ll leave this one out in the cold and I’ll just go to the store to grab some ice cream for the family.