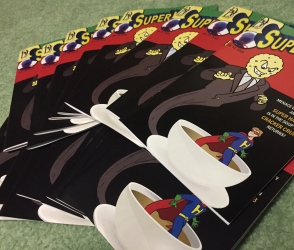 If you’ve ever watched the holiday classic Miracle on 34th Street, you’re likely familiar with the buzz created when the real-life Santa Claus (mistaken for an actor playing the role) is put into the throne at Macy’s with the intention to push overstocked toys and instead starts telling parents and children alike where to find the items they just can’t seem to find there at Macy’s.

Sending them to other stores?! Gasp! It sends the head of the toy department into a tizzy but strikes Mr. Macy himself as a brilliant marketing ploy of goodwill to make Macy’s the friendly store, the helpful store.

There’s really something to be said for customer service, isn’t there? 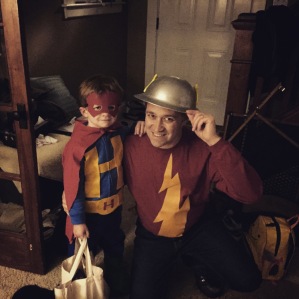 The Halloween he turned himself into a superhero that inspired it all.

You see, the past few years, an annual tradition has developed where on his birthday, I present our son (and last year at her birthday, our oldest daughter as well) with a custom-made comic book based on the super-hero persona he created for himself one Halloween back in preschool. I try to keep notes of the various characters his imagination develops as he played back then or creates in stories or drawings he makes currently, and incorporate them into these breezy little adventures that are all his own. And I try to have extras on hand as additional party favors for anyone at his birthday who may want one. 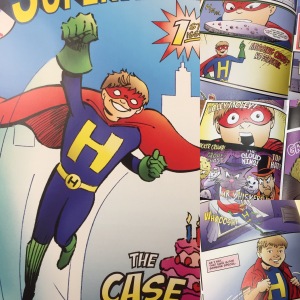 The tradition started three birthdays ago.

As in years past, I had ordered via an online printing service that does great work. Only this time, (through no fault of theirs) I made a mistake in the types of books I ordered, paper used. I admit being a bit obsessive about aesthetics at times and realized that these would stick out like a sore thumb amid the ones I’ve given him in the past. But re-ordering for such a small picky thing like that would’ve been too costly and wouldn’t arrive in time for his birthday.

So I started thinking local.

I stepped foot into a local printing and lithograph company that handles a lot of large scale orders in the area, including several magazines. I explained what I was looking to do, but that I only wanted 10, maybe 15 copies of this gift and party favor. They do large projects, but they told me the printer across the parking lot from them would have no problem handling the job well.

They didn’t tell me no and send me packing. They didn’t turn their nose up. They sent me and my business to someone more suited to it.

It was my Miracle on 34th Street moment.

So across the parking lot I hopped into Presto Print, where I was surprisingly greeted by a classmate from high school. An added bonus! I explained the project, what I needed, and she told me ‘no problem.’ To boot, they had it ready the very next day for me.

Thanks to these heroes, I had what I wanted when I needed it, all in time for my little hero.

There’s really something to be said for customer service.