The Snowball Method: An Update

If you’re just tuning in, some months ago I decided to apply what’s known as The Snowball Method of what remains of my large debts. It’s all steps toward as much of a debt-free life as I can muster, and to show my son that no, debt is not just ‘something you’ll always have,’ as so many of us, myself included for many years, were led to believe.

Some years ago, I decided enough was enough and started taking control by paying off roughly $13,000+ in credit card debt. But I was still saddled with four student loans from four different banks, and a car payment. For the purpose of this, I am referring only to debt accumulated through borrowing (including a car, but excluding out home), not monthly bills for services.

With that said and the credit cards paid off a few years back, I had taken aim at my four student loans. One student loan (Keybank) was paid off earlier this year. I then used the Snowball Method and applied everything that was being paid on that first student loan toward my second student loan, on top of my regular monthly payments.

To recap, this is where I was in May:

Well, last month I’m very glad to say that the National Education is now paid off too. This was accomplished by taking the roughly $300 ($150 each paycheck) and applying it on top of my monthly payment of $75 to National Education.

Four months later, my debt now looks like this:

Now, all that money (the $300 originally from Keybank then to National Ed, on top of the $75 from National Ed normally) will get applied on top of my usual monthly car payment of $325. That’s $700 a month, roughly toward my car payment. By my estimation, I should have my car paid off by late winter/early Spring, leaving me only with two student loans to worry about each month.

It may no look like a lot on paper (or screen, as it were), but the feeling to know there is one less in that stack every month is invigorating. Knowing that within a few months that can be down to two is rejuvenating.

Even if I get down to the two and only continue my regularly monthly payments, that frees up at least $700 a month for our family. Money that can be put aside and saved, or even put toward a new home someday as our family grows (not growing yet, just for the record. But we hope to someday).

And I’ll be very happy and proud to know that through saving, determination and hard work, I was able to earn it for us and to teach my son and any other children we may have that it IS possible to live within one’s means. That you can get by without credit cards, without a big television, or the latest technology, and still live full, enjoyable lives.  We can still be one big, happy family and we can also be debt-free (or close to it) at the same time.

Debt Chains and the Snowball Effect 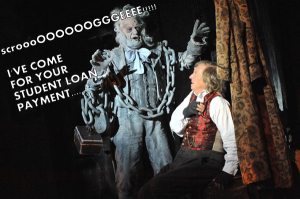 Whether it’s writing a check for your car payment or clicking ‘pay online’ for that student loan installment, carrying around debt can often times feel like you’re dragging along the undead chains of Jacob Marley.

That’s why I’ve already started the ball rolling in the past few months on what I want to take full-strength into the end of this year and the start of the next – paying it off. It’s possible to have a debt-free life. Oh, I know there will be bills to contend with, but debt is not the necessity that so many of us have been fooled into believing is necessary.

That whole idea that you need to spend some credit to get credit?

Nah-uh. I no longer buy into it. Why create more debt for yourself so that you can add to that debt or create new debt later?

I’m not preaching from on high on this. I’ve been saddled with debt for a very long time. I transferred around colleges a lot, including two years at a private school before going back to a state school. During that time, I frequently would get those student loan notices in the mail that would offer me the chance to make a payment then, but would read “$0.00 due.”

Well, the coffee shop barista/movie theatre projectionist who was working while in school and had expenses to pay for (apartment, food, gas, car payments, etc) chose to focus only on that “$0.00 due” and never gave a thought to the bigger picture. “Graduating college was a long time off, right? I’d get a great job and pay those off in no time when the time came.”

That’s what I told myself.

After college came some very low-paying jobs…and credit cards were added to the mix. I should have seen the warning signs early on that when I was relying on credit cards to get me through gas fill-ups on the car, among many other things, there was an issue. I didn’t see it, or chose to ignore it and I paid for it, with interest, later on.

Fortunately for me, it took about 3 1/2 years, but that credit card debt, all $10k+ of it was paid off in full several years ago. I can’t express what that felt like. It was like a boulder had been taken off my chest, and to know that I was able to pull that boulder off with some hard work and dedication, made it all the greater a feeling.

After that came paying off one of my four student loans, this one through Keybank. (Don’t you love how banks can sell/buy your debt around to each other, splitting off loans, adding to your monthly payments, as if you were an indentured servant? It’s scary.)

These days those ‘debt chains’ consist of the remaining three student loans and my car payment and I intend to pay them off as quickly as I can. It’s a lesson I learned but wish I hadn’t done so through “trial by fire.” I started an Investment Fund (with the intent to be used for education) for our little guy the minute I could, as did some relatives, contributing a little each month into investments that can be used for his education, should he choose to when he’s of age. It’s a head start for him, and it’s all in an effort to make sure he doesn’t repeat the same mistakes that I did.

So, I’m on the mission to pay this stuff off, sooner rather than later. Why am I telling you this and putting it out there to the blogosphere for all to see my financial shame?

Easy. The answer is – pressure.

Currently, how much I have to shell out every month and how much debt is still hanging over my head is known really only to me, my wife, and some of our family. I feel that by putting it out there, there is more pressure on myself to stick with it, to make it happen, or else I’ll have to admit to you and all the world on here that I failed, that I caved, that I didn’t see it through. And I see things through, even the not so great ideas.

I’ve read of something called the ‘Snowball Effect,’ where, once you pay one debt off, you take the money you were paying into it each month and throw it at another debt like wood into a fire. Disregard higher interest rates. You throw everything at the next lowest balance and pay the minimum on the rest. When it’s paid off, you take all that and throw it on top of the next one, etc, etc.

With that said, here’s where we stand (these are rough estimates):

So here’s the plan. I had been paying $75 on National Education every month. I’ve taken the money that went to Keybank ($150) and applying that to National Education EVERY PAYCHECK, on top of the monthly $75 I was making. So, that means I’ve gone from paying them $75 a month to $375 a month. By my estimation, that should have National Education paid off by the fall.

Once that is done, that $375 then gets tacked on to the $325 I already pay every month on my car, meaning I’ll be making $700 payments on my car each month. If I did the math right, that should wrap that up by the middle of winter.

Hopefully, you see where I’m going with this.

So, there you have it, interwebs. That’s my plan, and I would never share something that personal with the world if not for the need that by putting it out there, I feel the pressure to stick with it every month. It can be done, and it will be done.

But I will admit that I’ve given myself the clause that after National Ed and the Car are done, that I could use that $700 towards a mortgage if we’ve found a house in an area we like at that point. We’ve only been casually looking as we continue to fix up our own and try to find one we love, with room for our little guy to run around safely and possibly more kids down the line.

We’ll see, but there you have it. That’s my plan to unlock these chains.