What? No blog entry on Father’s Day? You’re a dad blogger for crying out loud!

There’s a very simple reason I am blogging about Father’s Day today and not yesterday. I was too busy enjoying it.

Father’s Day was an absolute delight for me. I got up and Meg had made a wonderful breakfast for us of toast, eggs, bacon and hashbrowns with blue potatoes! After the delicious meal, we got ourselves dressed and headed out to the historic train station in my hometown for “A Day Out with Thomas” (as in, the tank engine).

The courtyard of the station was filled with activities for the family, ranging from a safety house by the fire department, to a table stationed by two police officers talking about safety tips for kids and families.

We rode a little train car around an enclosure with other families, got our picture taken with Sir Topham Hatt, where the little guy became instantly shy. Later he would tell me he was worried Sir Topham Hatt would be ‘cross’ with him, something that is a frequent habit when the trains do something wrong on the show.

Then, with a large whistle and puff of steam, along the tracks came Thomas, bright blue and red, pulling passenger cars behind him. Together, the three of us made our way inside, up stairs, down an overpass and back down to the other side of the tracks. As passengers from a previous ride got off, we walked up to the front of the train, where Thomas greeted us. Eyes and mouth moving, he literally came to life in front of us, and our little guy ‘beamed, from buffer to buffer,’ as they say.

Soon after, we boarded, the familiar sounds of songs from the show playing in the train and before we knew it, we were off, Thomas us pushing us about 15 minutes out of town, through a marsh, and our little guy glued to the window the whole time. 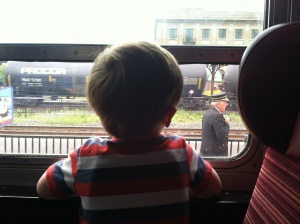 He sang, surprising us with how many of the songs he knew and sang right along with, and pointed out all the characters that decorated the train windows as decals. He even got a certificate declaring him a Junior Conductor.

When the train returned to the station about a half hour later, we decided to hit up some of the other activities. I was relieved we had gotten pictures with Thomas and Sir Topham Hatt out of the way early on, as the lines at this point had grown crazy. Not good for an antsy child.

He gravitated toward a sand table, digging his hands into the gritty brown stuff, made a little wet by the myriad of constant bubbles coming from a machine nearby and saturating all the sand. He pushed trucks through it, let it sift through his hands…and then suddenly decided to tell other kids coming and playing in it that they couldn’t use the toys. We raised our voices and he begrudgingly conceded. When it happened again, we decided it was time to move on. We gave him one minute to wrap up. It wasn’t long before that minute arrived and we told him it was time to head to the gift shop before heading out.

And then came the meltdown.

Face red,eyes squinted. Mouth gaping open, wailing and screaming as if I was hurting him. All because it was time to move on.

I felt like the eyes of every parents and child at the train station in that moment were on us, wondering what the heck we were doing. Telling him we were going, asking him to take a breath and count to four, talking to him, being stern – nothing worked. It was a mess.

By the time we got to the car and loaded back up, he stopped screaming but was whiny, and we talked about our displeasure, discussing wiith him why he was being bad and had to go. I know. I know. Terrible Twos. Threenager. I’ve heard ‘em all. But in those moments, it doesn’t make it any easier.

We drove around in the car, making a stop to grab some cat food and then grabbing some lunch. By this time, he was calm, but tired. We even had trouble getting him to stand up in line. He kept doing the ‘jelly knees’ where he’d go limp and we’d be forced to continually try to pick him up just to make it to a table.

By the time lunch was over, and he held his head in that little hand, he finally admitted that he was tired. It was somewhat after noon and we were approaching what would normally be nap time.

And, whether sleep-deprived or just plain loopy, he turned to me and said “Happy Father’s Day, Daddy!”

As much as the meltdowns drive me nuts, causing me to question absolutely everything I do as a parent, looking at the day as a whole, they were a pretty small fraction. When I look past that (knowing we’re working to deal with it as best we can), and think of that boy who was bounding with a smile so big it was as if his face developed extra muscles at the site of Thomas, the laughter and awe as he looked out the window of the moving train, I realize, it was a pretty damn good day.