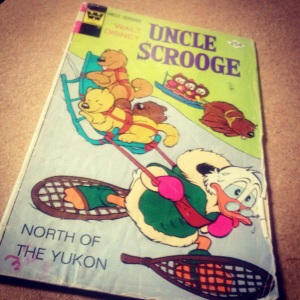 No, no, no. I don’t mean that. (Get your mind out of the gutter.) I mean many moons before that, when some of you picked up your first comic book to give it a read. Chances are that if you’re like me, it stuck and you’ve been reading them ever since.

I remember mine quite well. I was probably around 5 or 6 years old and was out of school, sick. Both my parents working, I spent most of the day under a blanket at my grandmother’s house. I remember it being very gray outside, the blanket of the clouds and lack of lights on in the house making it seem as gloomy inside as it was outside.

The day would have been pretty boring and forgettable if it weren’t for one moment – when my grandmother reached into the closet and pulled out a stack of comic books and plopped them in my lap to read. There was a wide array in that pile that I would eventually make my way through – a Richie Rich whose cover had him riding in a giant roller skate, a The Brave and the Bold featuring The Flash and Batman at the Disco of Death, but it was that one on top of the pile that would open the door for me.

It was a copy of Uncle Scrooge #124 from December 1975. Titled “North of the Yukon,” and was a reprint of a Carl Barks classic long before I would know who Carl Barks was. (For those of you wondering, he was a cartoonist who actually created Uncle Scrooge and you can read more about him here.)

Little did I know it at the time, but the story was the last that Barks would write of Scrooge’s adventures in the Yukon. It involved sled dogs and was inspired by a real life article Barks had read about a dog named Balto, who participated in the 1925 Great Race of Mercy in order to deliver an anti-toxin that could halt an epidemic of diphtheria.

From that one Uncle Scrooge book, I would dive into the vast world of Disney’s Ducks, making my way over the years  from Ducks to do-gooders, as Batman tangled with the Joker, Superman’s Lex Luthor went from Mad Scientist to Bald Billionaire, and me loving every minute of it.

It was my gateway drug into a lifelong love for comic books, and before long, I was forcing my family to stop by magazine kiosks in the mall or any bookstore where I caught a glimpse of a spinning comic rack in the window. This was all before I discovered my first comic book store, of course (an entire store devoted to comics?! A story of discovery for another time).

My reading list is pretty small these days when it comes to comics. Maybe it’s the simple joys that made for more discerning tastes as I got older. I expect to have a story that instills me with that same awe and wonder I did I had on that first read so many years ago.

It isn’t often (J. Torres’ The Copybook Tales did it, Darwyn Cooke’s New Frontier did, much of Sholly Fisch’s work on Batman: Brave and the Bold sure did, as is Batman 66′), but every now and then I’ll come across a book in my adulthood that brings about that pure sense of enjoyment I remember feeling as a kid when I sifted through the pages of a fresh new comic off the rack and in my hands. In other words, it makes you feel like a kid again. 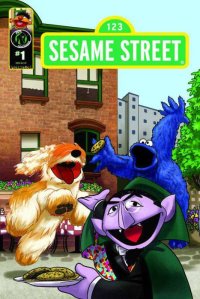 On a recent trip to the store, I came across a copy of a Sesame Street comic book by Ape Entertainment and brought it home for my son. It was partly a joke – ‘hey, honey, look, a comic for him!’ – but it turns out that every now and then he’ll pull it off of his bookshelf and flip through the pages, pointing and laughing at his favorite familiar and fuzzy Muppet characters. Sometimes he’ll hand it to me, indicating he wants it read to him, and I’ll break out the Sesame Street voices I can manage (Grover, the Count, Cookie…I can’t get a handle on Elmo…) and we laugh and have a good time.

Maybe the apple doesn’t fall far from the tree. I don’t want to force anything on him, and I try to always restrain myself from going too far when presenting him with something because I liked it. But, who knows. Maybe one day he and I will be making a trip to the comic store together and looking through the racks for age-appropriate books he may find fun. Because that’s what comics SHOULD be about – fun.

Decades later, it’s pretty amazing to think that such a big part of one’s life all started with a single sick day on the couch and the richest duck in the world. Sifting through a box in my basement recently, I lit up when I discovered I still have that old book. It’s a little more yellow and a little worse for wear, but it’s still around. It’s probably been more than 25 years since I peered through those pages.

Maybe it’s time to give it another read.

Whether you started age 5, 15, 25, or 45, everybody’s got a first book that started them on their comic path. If you’ve got one, please don’t be afraid to share it with me in the comments. I’d love to hear about it.