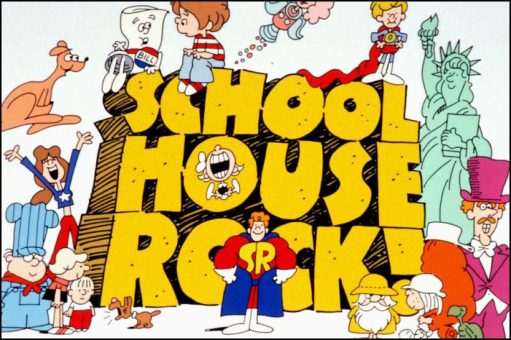 Learning comes in all forms. Some people are visual learners. Some auditory. Some need to get their hands in the thick of it to grasp concepts the best. I’m of the belief that regardless of what kind of ways you learn best, we retain the most concepts when we’re having fun with those concepts. Sometimes it’s a project in school that got you jazzed to be taking part in, or a teacher that made you laugh while you learned. The association with your enjoyment brings back and retains the knowledge you gained along with it.

And I think that’s why Schoolhouse Rock! has been a reference point for so many of us from the 1970s, 80s, 90s, and to my surprise, beyond.

In case you weren’t around during any of its original run or its encore, the Emmy award-winning Schoolhouse Rock was a series of short animation segments that aired in between various Saturday morning cartoons on ABC. With humor and catchy tunes, they taught elements of history, civics, grammar, science, math, and more. Its initial run lasted more than a decade, from 1973 to 1984, and came back with a mix of new and old episodes for a few years in the early 1990s.

To my generation, they’re classics, but they’re the sort of thing I’ve always felt would end up being just a fond memory of our childhood when we look back on those halcyon days of Saturday morning lineups, a box of cereal, and toy commercials that flood through our nostalgia-soaked minds. So imagine my surprise when I recently walked into the living room to find all our children laughing along with the series, courtesy of Disney+!

Since the series was released on the streaming platform earlier this month, they’ve watched them over and over again, quickly weeding out their favorites, viewing them (and singing along) again and again.

The 1976 classic still gets a lot of play in our home, and its influence already has our 7 year old discussing the process of lawmaking in discussions. Spoofed dozens of times over the years, this one stands out as probably the most famous of School House Rock entries, with a walking, talking bill explaining to a small boy why he’s sitting on Capitol Hill, hoping he doesn’t die in committee, and can one day become a law. History rock that makes an impression – for any generation!

Hey! Wow! Yeow! Hooray! They show emotion! They show excitement! Sometimes with an exclamation point or a comma if the feeling isn’t strong. A wonderful 1974 entry in the grammar themed segments, whether it’s a great grade on a report card, a shot in the bum by the doctor, or losing the big game, this drives home with various scenarios how much the words we use can express ourselves when used correctly.

The Tale of Mr. Morton

One of the later entries into the series, this one comes from the early 90s but is no less catchy and fun.In the story of shy Mr Morton, the song teaches the grammar elements of subject and predicate. Our kids quote its small bits of dialogue all the time and I find myself walking around singing part of its chorus “Mr Morton is the subject of the sentence, and what the predicate says, he does.”

What about you? Were you a Schoolhouse Rock fan? Any favorites on your personal playists? Feel free to share them!

One thought on “‘Cause Knowledge is Power!”